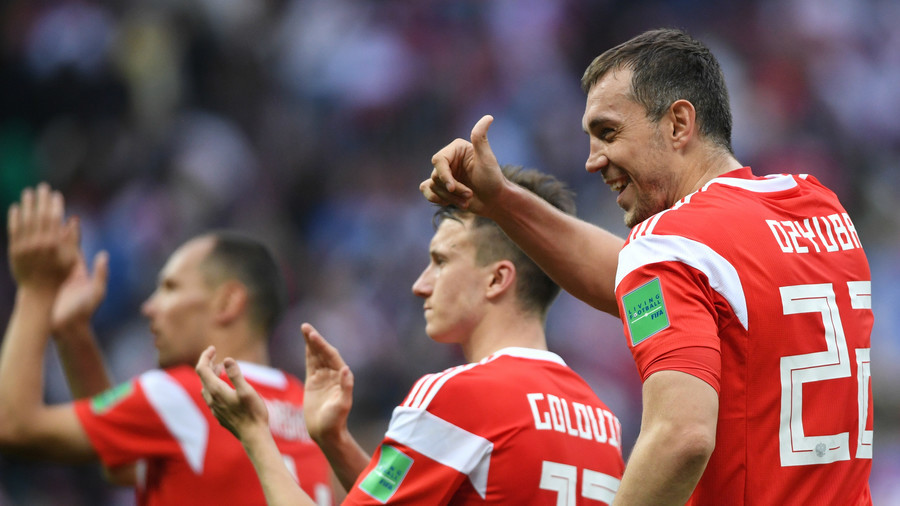 Far from events in Moscow, in Russia's most southerly large city, ninety minutes of determined and often sublime football ignited local passions as World Cup 2018 began. The UK press might resent it, but the party has started.

Ten minutes before World Cup 2018 kicks off and Vanya and Misha aren't feeling confident. Despite the sweltering 34 degrees Celsius (93 F) Kuban summer heat, they are dressed in shirts and ties, and awaiting the Russia-Saudi Arabia game with emotions more akin to dread than elation.

"We've failed to win any of our last seven matches, and we're the lowest-ranked team in the competition," Misha explains. "I didn't even bother to buy a jersey: but Vanya stuck a flag on his car, he's always been a masochist."

Despite the nod to patriotism, Vanya is equally downbeat. "I could see us losing to the Saudis today, and then the whole show becomes quite depressing for Russians, outside of the host cities."

We are in a heaving sports bar on the main street of Krasnodar, a soccer-mad sprawl with a population of over one million. Until last year, the city boasted two Russian Premier League clubs, but was overlooked for the World Cup, apparently due to its relative proximity to Sochi and Rostov-on-Don.

Russia won the right to stage the tournament in December 2010, fending off joint-bids from Portugal/Spain and Belgium/Netherlands. England also competed, receiving only two of the 22 votes on offer. And their media has been distraught ever since.

WHIPPING UP A STORM

To that end, in recent months the London press has delivered an onslaught of negative coverage of Russia, running the full gamut of good taste from y to z.

Indeed, almost every crass stereotype has received an airing, with headlines such as "Beware of honeytraps at Russian World Cup, spymaster tells fans" (The Times) and "Russia World Cup: Kremlin SEX THREAT to England players" (The Express) making clear the agenda at play.

British authorities have been keen to feed the sensationalism. "Britain's most senior football police officer has warned England fans travelling to the World Cup they are in danger of being subjected to an "extreme level of violence" at the hands of Russian hooligans, warned The Telegraph last October, to cite just one example.

At the same time, rather than using their on-the-ground knowledge of Russia to calm scare-mongering, Moscow correspondents for British news outlets have been mostly fueling fears, presumably at the behest of editors in London. Here's the Telegraph's man a few weeks ago: "British fans could face whips when Vladimir Putin's 'storm troopers of the tsar' patrol the World Cup."

For journalists who try to cover Russia fairly, using facts rather than ideology, this kind of carry-on is, sadly, predictable. But it generates feelings of pity, rather than anger. For instance, on Thursday afternoon, a few hours before the big game, the former Moscow correspondent of the Guardian just happened to bump into British gay rights campaigner Peter Tatchell who was looking for attention around Red Square.

In widely shared tweets, the reporter noted how "Tatchell (was) politely but firmly marched off by police to a waiting car and the police station. Even tho(ugh) (a) one-person demo(nstration) should be legal (in Russia).'' However, as any hack worth their salt here knows, both unauthorized mass or one-man protests have been banned between May 25 and July 25 near "FIFA infrastructure," which de facto means all host cities.

Anyway, back in Krasnodar, where visits from joyless British hacks are thankfully rare, Krasnaya Street was heaving as local hero Yury Gazinsky headed Russia into a 12th minute lead against the Saudis. Villarreal's Denis Cheryshev steadied nerves with a second pre-interval strike, before the floodgates opened late on, with goals from Artem Dyzuba, Cheryshev again and Alexander Golovin, with a peach of a free kick. In ninety minutes, despondency had transformed into elation.

Hoping to see them feeling somewhat better, I went looking for the downbeat duo I met before kick-off. Vanya grabbed me in a bear hug as he whooped loudly about how Russia's manager Stanislav Cherchesov was a genius.

If Russia keeps playing with this kind of swagger, he'll get good value out of his purchase.