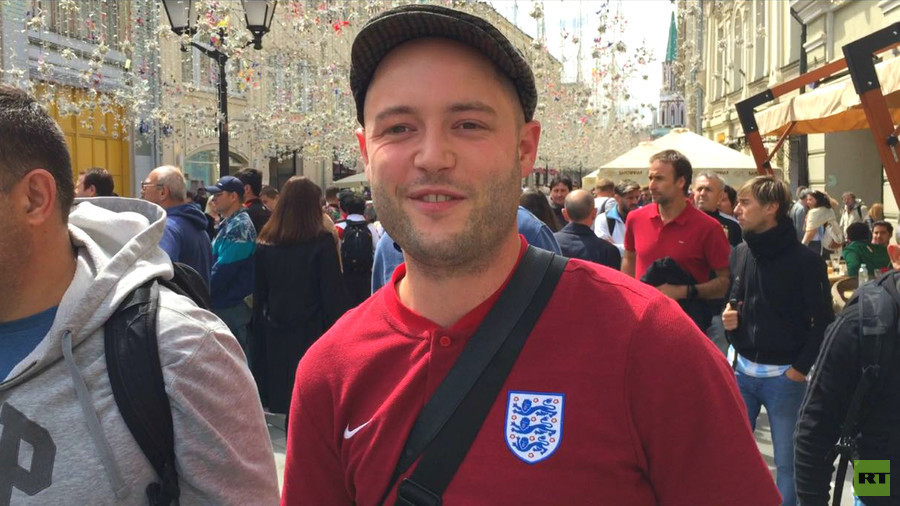 The first trickling of England fans have emerged in Moscow ahead of the Russia 2018 World Cup opening game on Thursday, and traveling Three Lions fans have been pleasantly surprised by the intense party atmosphere.

They include England fan Dave Shaw, a photographer following the England team around the tournament who had flown out from his native London to watch the team.

“It’s amazing, I’ve been really pleasantly surprised at how nice (Moscow) is, just walking around the centre of town. It’s been fine, it only cost be 50p to get from the airport to town! So yeah, everything has been really easy so far," Dave, clad in England shirt and flat cap, told RT.

“It’s been amazing I’ve meeting loads of fans from all around, everyone’s been really friendly so far so yeah it’s been really nice."

Dave was however less optimistic about the chances of his side progressing from a group containing Tunisia, Belgium and Panama, but promised it wouldn't spoil the celebratory mood among the Three Lions fans.

“Not so well, but we’re here for the party so that’s all right!" Dave, who hails from Peckham in South London, continued: "We hope for the best in England, but I can’t see us getting that far this time.”

Stood in the heart of Moscow proudly wearing his England colors, Dave took a cheeky peak around to spot potential troublemakers, but could only spot fans basking in World Cup fever.

"Absolutely not! Not at this point no," was the response. England kick off their World Cup campaign against Tunisia in Volgograd on Monday.