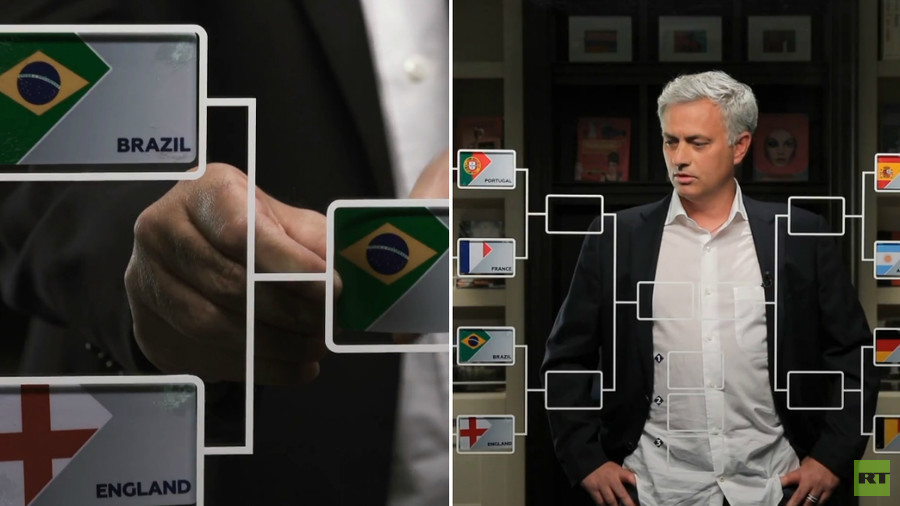 Jose Mourinho has predicted a mouthwatering World Cup quarter-final clash between England and Brazil, although the Manchester United boss believes the match-up will end in more heartache for the Three Lions.

The Portuguese managerial mastermind revealed who he thinks is destined for knockout stage glory this summer in Russia, as part of RT’s exclusive #MatchMourinho predictions playoff.

Mourinho has foreseen a repeat of the memorable Brazil versus England quarter-final in 2002, when Ronaldinho’s stunning 40-yard free-kick helped the Samba Boys to a 2-1 victory in Japan.

Double Champions League winner Mourinho earlier predicted that England would emerge from their World Cup group as winners – setting up a predicted match with Poland in the last 16.

The Portuguese believes Gareth Southgate’s men would prevail in that clash – but would see their World Cup dreams dashed in the next round against five-time winners Brazil.

The renowned manager says Brazil will defeat Mexico in the last 16, before knocking out England to set up a battle of the South American giants against Argentina in the semi-final.

The Manchester United boss put a philosophical slant on England's predicted defeat, saying that for him at least “it’s not bad that my players go on holiday.”

Brazil's presumed victory over England would set up a semi-final clash against Cristiano Ronaldo and Portugal, Mourinho believes.

In the other side of the draw, the Portuguese has backed perennial challengers Germany to reach the semi-finals, where he predicts they will face off against "that little fellow" Lionel Messi and his Argentina team.

We’ll reveal tomorrow exactly who Mourinho has backed to win the tournament outright – so be sure to follow the RT website and across our social media platforms for all the info.

You can react to Mourinho’s predictions so far by commenting at the bottom of the page, or by heading to RT Sport’s Facebook page, or by looking out for the #MatchMourinho hastag on Twitter.