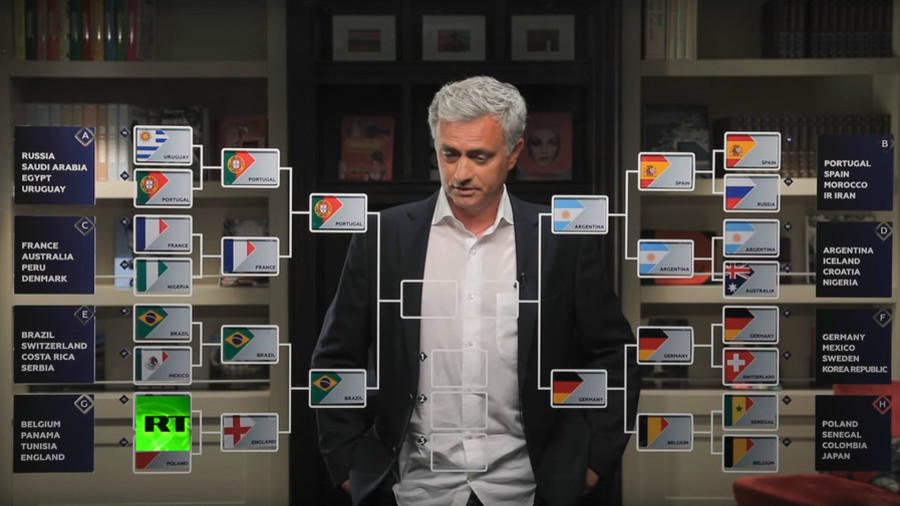 Jose Mourinho has revealed the teams he thinks will go all the way to the semi-finals at the World Cup in Russia this summer, as part of RT’s exclusive #MatchMourinho predictions playoff.

Last week we revealed the teams that managerial great Mourinho has backed to progress from each of the eight World Cup groups. We can now tell you who the Portuguese serial winner has picked at the business end of the World Cup, all the way up to the four semi-finalists.

In one half of the draw, the Manchester United manager has predicted his native Portugal have what it takes to go all the way to the final four, forecasting that they will see off Uruguay in the last 16, before triumphing against France in the quarter-finals.

In the semi-finals, Mourinho predicts that Cristiano Ronaldo and Co. will come up against a Brazilian team who have beaten Mexico in the last 16 and then overcome England in a repeat of the two teams’ 2002 World Cup quarter-final in Japan.

In the other section of the draw, Mourinho has backed “the little fellow” Lionel Messi to lead his team all the way to the last four, knocking out Australia and 2010 World Cup winners Spain in the process.

Two-time Champions League winner Mourinho expects the Argentinians to face reigning world champions Germany in the semis, with Joachim Low’s team knocking out European opposition in the form of Switzerland in the last 16 and then Belgium in the quarter-finals, according to Jose.

That leaves things on a cliffhanger with the four semi-finalists in place.

However, you won’t need to wait long to see Mourinho’s prediction for those games as well as the World Cup final itself, as on Wednesday we’ll be revealing the Special One’s selections for a stunning tournament finale.

If you think Mourinho’s World Cup predictions are spot on or reckon the serial winner should stick to the management game, let us know.

You can also check out the #MatchMourinho hashtag on contribute to the social media buzz around the predictions.