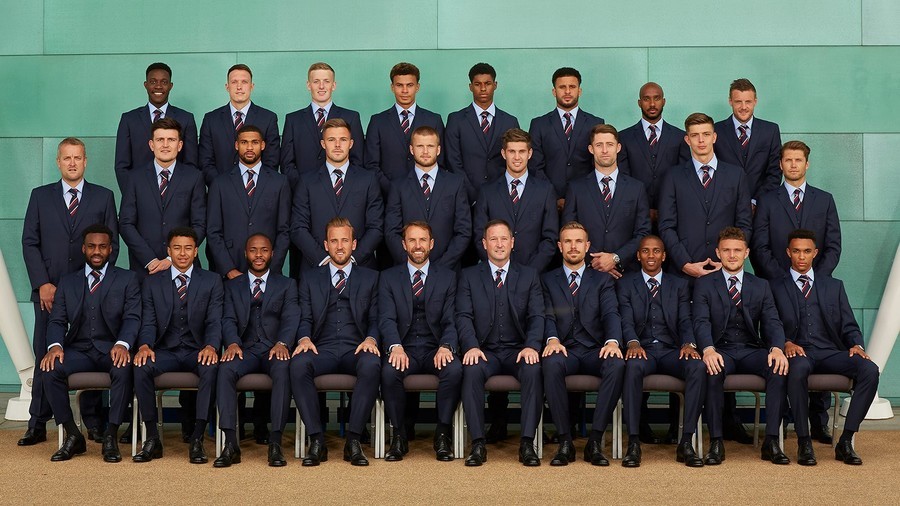 World Cup team photos are meant to be a serious statement of intent – but England’s effort has prompted the Twitterati to compare the players to school leavers rather than tournament-bound footballers.

England released the team photo on Tuesday with the caption “Ready for Russia” – although many social media users thought the team looked more like they were ready for class.

Back row looking like a Year 11 leavers photo pic.twitter.com/ESGfylbcXw

Many thought Gareth Southgate’s men had made a schoolboy error as they posed in their navy blue suits with striped ties as they prepared to fly out to their World Cup base in Repino, near St. Petersburg, on Tuesday. Twitter users commented the lads looked more dopey than dapper.

The back row of Jordan Pickford, Dele Alli, and Marcus Rashford in particular were said to make the picture look more like “a Year 11 leavers photo.” Social media users were also quick to pick up on the poses adopted by specific players.

Danny Welbeck’s selection for the team has cause bewilderment among many, and they player’s somewhat clueless look appeared apt.

I have no idea why i am here 🤷🏻‍♂️🤣 pic.twitter.com/oTfOTYivHP

The size of defender Harry McGuire’s head was a cause of bewilderment for many.

Look at the size of his head 😂 pic.twitter.com/dfh1qLR6gp

Manchester United striker Marcus Rashford didn’t exactly look happy to be there, with his perceived scowl prompting one social media user to compare him to “that kid at school that always got kicked out of class.”

That kid at school that always got kicked out the class pic.twitter.com/GYccFBNbC3

Fellow forward Jamie Vardy meanwhile was described as “that one kid that always stinks.”

That one kid at school that always stinks pic.twitter.com/6GLTfxu7em

Defender Gary Cahill – the veteran of the team with 60 caps to his name – was likened to “that one teacher who was really sound,” while fellow defender John Stones was labelled “head boy” for his well-groomed appearance.

That one teacher who was really sound. pic.twitter.com/twHCBfODft

And the Head Boy. pic.twitter.com/cW6tiY4lWe

The playing staff were spared no mercy, with one social media user questioning why captain Harry Kane was apparently “bringing his dad along” to Russia.

The England effort was certainly a long way behind Nigeria’s World Cup travel gear, as the Super Eagles soared into Russia on Monday rocking some stunning white outfits set off with stylish green trim.

England will be flying out to St. Petersburg on Tuesday. The Three Lions have been drawn in a World Cup group containing Tunisia, Panama, and Belgium, and open their campaign against the Tunisians in Volgograd on Monday.

The question is: will they be taught a footballing lesson in Russia this summer?