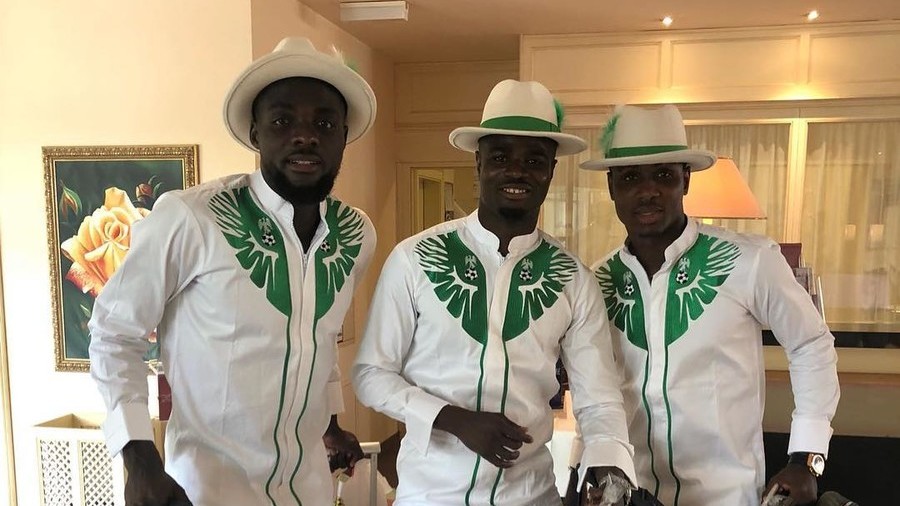 Nigeria have upped the stakes in the World Cup fashion battle, heading for Russia in stunning white travel suits set off with a football design and wing-like pattern with a nod to the team’s Super Eagles nickname.

The Nigerian players unleashed their sartorial splendor on social media as they prepared to fly to Russia on Monday.

Nigeria had already wowed the world with their new Nike kits ahead of the World Cup, with sales exceeding 3 million.

They’ve now taken football fashion to another level off the pitch – in a move which divided opinion on social media.

With all these our outfits, the jerseys, suits and this attire, i just hope we are not just going to Russia to model.

Twitter user Chucho Maine played on the similarities to the ceremonial attire of superhero the Black Panther, punning “Wakanda sh*t is this?” - in reference to the Marvel character's homeland.

Wakanda shit is this?

The travel suit choice went down much better with others, however, with one user saying that even if the team did fall short in Russia, at least they would go down in style.

If we don't win,at least we are going to be noticed, Nigeria to the world

If the Russia World Cup was all about fashion, Nigeria would lift the trophy before even kicking the ball. https://t.co/v1izQR19f4

Solomon Godwin A wrote that the outfits would match the team’s stylish play.

@ChelsTransfer ! We will shock the world not just with our outfit, but also with the knocking of the ball. Super eagle soar

Other social media users linked the stylish suits to the team’s on-pitch attire.

Nigeria’s Super Eagles looking for best dressed accolades on and off the pitch at Russia 2018. pic.twitter.com/DclxYRLXy3

Gotta hand it to Nigeria, looking sharp yet again! 👍🏾 https://t.co/RAGya5VIQy

Recent days have seen a flurry of arrivals to Russia ahead of the World Cup kick-off on June 14 – and many have showcased previously unseen sartorial skills.

Iceland had a cool blue-jacket number that some saw as Viking vogue, although others took it as a footballing fashion flop.

Panama are perhaps the team to have given the Nigerians the best run for their money fashion-wise so far, donning stylish headgear when they flew in last week.

Nigeria are expected to land in Southern Russia later on Monday, and face a World Cup group containing Argentina, Croatia and Iceland. They open their campaign aginst the Croatians on Saturday in Kaliningrad.