Stone me! Stunning Salah & Messi mosaics appear in Kazan ahead of World Cup 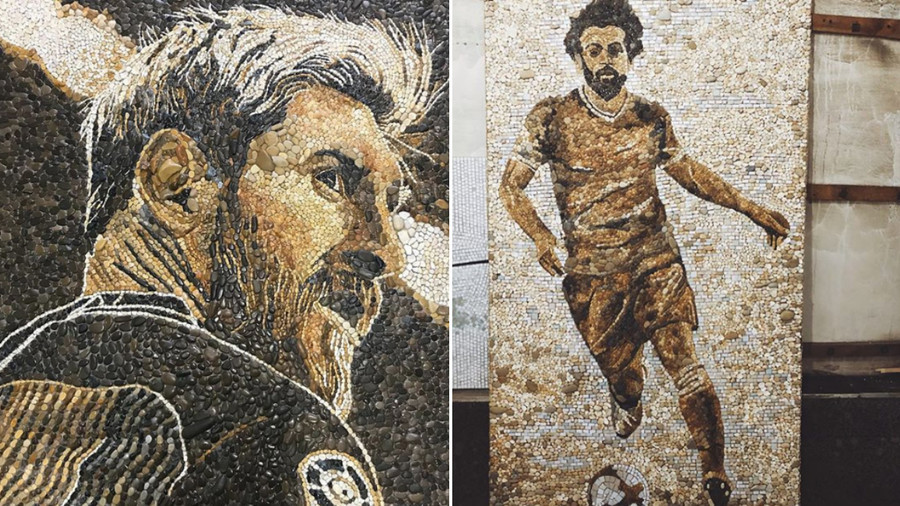 A group of artists in Kazan have created stunning stone mosaics of some of the stars of the World Cup including impressions of Argentina's Leo Messi and Egypt forward Mohamed Salah.

The group meticulously designed the creations from photographs of the players, painstakingly placing each tiny stone to capture the pair's distinctive looks.

A member of the artist collective, Anna Solnechnaya, told RT on Sunday on a visit to her studio that inspiration for the masterpieces comes from a desire to create mementos for visiting fans.

"We made such interesting portraits with our team, art objects made of stone, in order to surprise people and show our city. We want [fans] to find something interesting to remember," she said.

“These are our legendary footballers, icons of the sport, admired stars: Messi and Salah. We chose them because they have gained a lot of popularity right now.

“They are not coming to Kazan, but we’ll have a lot of fans here who know them and would like to see them, take pictures of them and our entire team did it for exactly that.

"These lovely portraits are made from stone. We want to wow people, to show off our town, so that their visit will be memorable," she added.

The portraits will be available to see in the streets of Kazan in a special exhibition organized by Anna and her team to offer a perfect picture opportunity for tourists and fans.

Kazan is one of 11 host cities for the Russia 2018 World Cup. The city’s eponymous Kazan Arena is one of 12 host venues, and will host six games in total.

Mo Salah arrived with his Egypt team at their training base in Chechnya on Sunday, where he and ‘The Pharaohs’ were greeted with a traditional ‘lezginka’ dance.

Salah is facing a race to be fit for the World Cup. Having sustained a shoulder injury in the Champions League final in May, the player expressed hope he will be ready for Egypt's opener with Uruguay on Saturday.