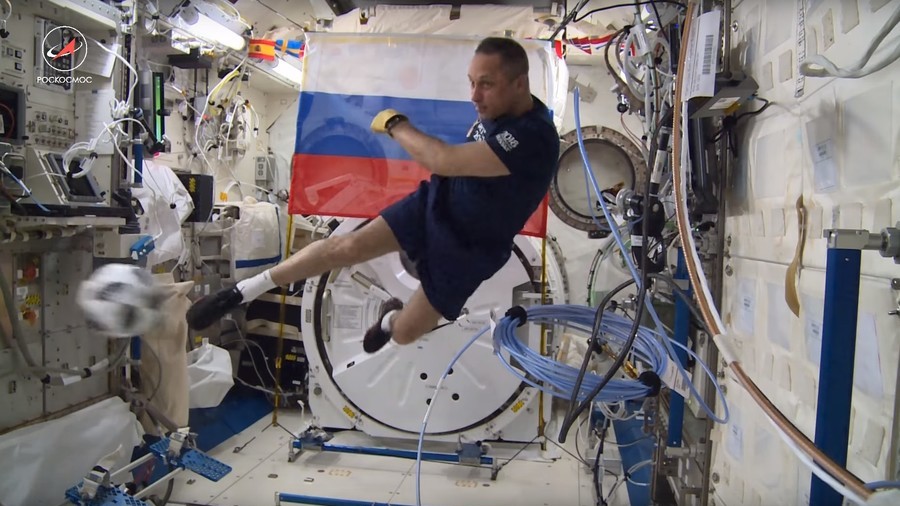 Russian cosmonauts Anton Shkaplerov and Oleg Artemyev have demonstrated their zero-gravity football skills in a cosmic kickabout at the International Space Station (ISS).

In a video released by Russian state space agency Roscosmos, the pair take it in turns to fire gravity-defying shots at each other in an orbital training session in honor of the upcoming World Cup in Russia.

In the clip, Artemyev, who is sporting an official FIFA World Cup Russia 2018 T-shirt and yellow gloves, is seen setting up an ersatz goal at the space station, topped with a Russian flag and with the smaller flags of various nations strung up in the background.

Using an official World Cup ball, the cosmonaut then performs various tricks, including a number of volleys that Real Madrid stars Cristiano Ronaldo and Gareth Bale would be proud of.

Fellow cosmonaut Shkaplerov, who has also donned a Russia 2018 T-shirt, is then seen performing similar acrobatic feats as he fires shots at Artemyev.

The ball used by the pair was brought to the space station especially for the kickaround, and it is planned that it will return to Earth together with the crew on the Soyuz MC-07 on June 3.

Back on Earth, the World Cup will kick off on June 14 when Russia take on Saudi Arabia. The tournament will run until July 15, and will see 64 games take place at 12 stadiums across 11 host cities.

Follow the latest news on the World Cup in Russia on RT Sport's special project - rt.com/fifa2018