World Cup preview: France threaten to dominate Group C but who will join them in the next round? 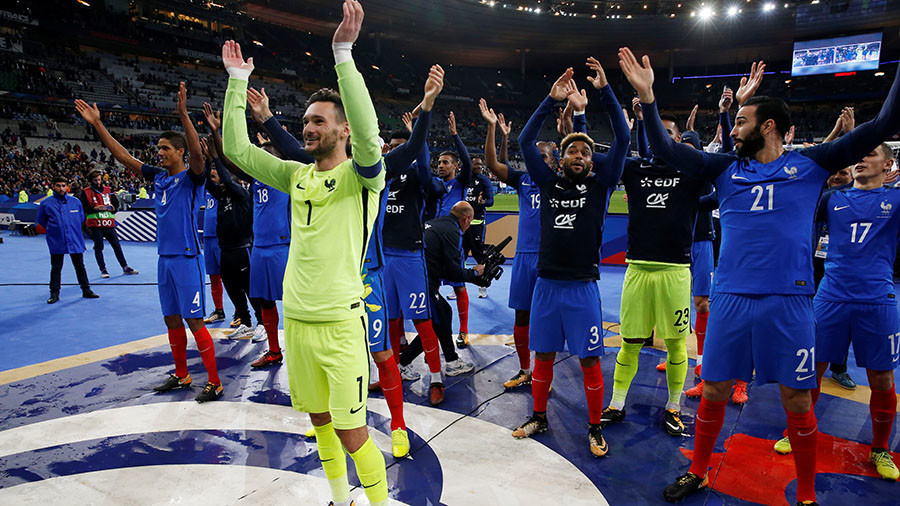 Former champions France have assembled one of the most talented squads in the competition but will they collapse under the weight of public expectation or will it translate into Group C dominance at the 2018 FIFA World Cup?

The French are overwhelming favorites to top their group at the World Cup but with no clear front-runners to join them in the knockout stages, it will be the three-way duel between Denmark, Peru and Australia which could well be the most interesting ties. RT Sport has all you need to know about World Cup Group C.

Perennial contenders France boast one of the tournament's most complete squads and it will be a surprise if they don't qualify from one of the World Cup's less competitive groups with ease. Head coach Didier Deschamps, who won the World Cup in 1998 as captain of Les Bleus, has an impressive array of attacking talent at his disposal spearheaded by the supremely talented trio of Antoine Griezmann, Kylian Mbappe and Ousmane Dembele.

They are not a top-heavy team, either. Real Madrid's Raphael Varane and Barcelona's Samuel Umtiti will provide a calming influence at the back in a defense stewarded by one of the best goalkeepers in world football, captain Hugo Lloris. The loss of Laurent Koscielny from the tournament with an Achilles injury is a blow but such is the strength in depth at Deschamps' disposal that it shouldn't be felt too keenly.

The danger for France is the weight of expectation placed upon them by the public. They will be expected to handsomely beat their Group C opposition en route to the knockout stages, with any missed step along the way likely to be dissected by the French media. Realistically though, France will be expecting to top this group and begin their World Cup challenge on the front foot.

It is hard to isolate the most important components of a team as talented as this but in order for their attacking threat to flourish it must be built on a solid foundation and France's bedrock is Chelsea midfielder N'Golo Kante. There are few better ball-winners in world football than the diminutive Parisian and it will be his job to secure possession and supply the more creative players surrounding him.

The Aussies are regular participants at World Cups though this time around their ranks don't appear as strong as in tournaments past. Gone are the days when their team was littered with talent from the English Premier League, La Liga and elsewhere. This time around their ranks are comprised of players from lower divisions in England and their own domestic A-League, a gulf in class which will be telling at the highest level.

READ MORE: Can Spain and Portugal exorcise World Cup demons in Group B?

Tim Cahill, a candidate for Australia's greatest ever player, will be aiming to score in his fourth World Cup, though, at 38 years old, only the most blinkered of fans would claim that his powers aren't hugely diminished.

If France win this group as expected it will be the results between the remaining three teams which will decide who else moves to the knockout stages, so the focus of Bert van Marwijk's men will be almost exclusively on the showdowns with Peru and Denmark.

With Cahill rightly considered a fading force, Aaron Mooy will be tasked with pulling the strings in the Australian midfield. The Huddersfield Town man has an exquisite touch and an excellent range of passing but isn't the most mobile player for a particularly demanding position. Nonetheless, if Australia are to leave the World Cup with their heads held high one suspects that Mooy will have a big influence on proceedings.

It is something of a surprise that Peru even qualified for Russia 2018 given the fact that they had to edge out South American champions Chile to do so, but qualify they did. Whereas many South American teams tend to be built on star-studded talent, Peru's strength lies more in their ability to rally their ranks together into an effective unit.

Jefferson Farfán, the biggest name in the Peruvian ranks, will be no stranger to the locales this summer having bagged 14 goals in the colors of Lokomotiv Moscow. His striking partnership with controversial forward Paulo Guerrero, who returns from a drugs ban just before the start of the tournament, will ask questions of opposition defenses but both strikers are in the twilight of their careers wherein the law of diminishing returns certainly applies.

Renato Tapia, Feyenoord's dynamic young midfielder, will be in the shop window this summer in Russia and could earn a big money move if he delivers on his potential at the highest level. Whether or not he is capable of delivering the types of performances which could drag Peru to the next round remains to be seen.

Conquerors of the Republic of Ireland in the playoffs, Denmark's group is arguably the most talented collection of players they have had in a generation and they will be considered the most likely nation to emerge from the group in tandem with France.

The Danish defense, marshaled by Chelsea youngster Andreas Christensen, is a source of strength for the team, as is the stature of Tottenham's Christian Eriksen who has become one of the Premier League's most consistently creative forces but it is up front where the Danes may struggle. Despite claims to the contrary (mostly made by himself) Niklas Bendtner has never really delivered on his early potential, though his record of 30 international goals does stand out on his resumé.

Progression to the last sixteen of the tournament will be considered a success and it is a very achievable goal for the Scandinavian side.

Eriksen. He is the type of player who would be considered for practically any side in the competition and is a threat from both open play and dead ball situations. If Peru and Australia afford him too much space, it will likely result in their elimination from the tournament.