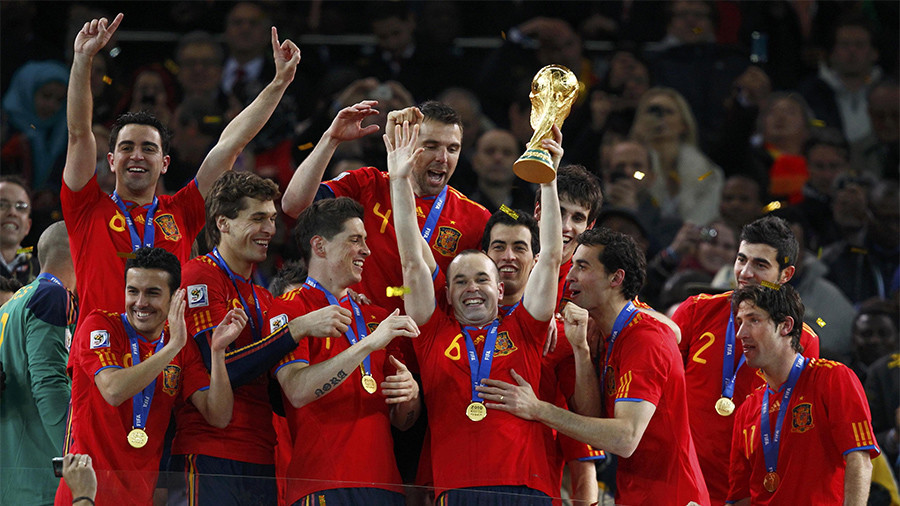 Group B features two of football's most prestigious teams, Spain and Portugal, but both underperformed four years ago. Will it be different at Russia 2018?

Spain and Portugal, two of the most talent-laden squads in European football, experienced an early exit from the 2014 World Cup, and both teams will have revenge on their minds this time around.

Will Morocco and Iran stand in their way, or will the likes of Ronaldo and Iniesta begin a march towards World Cup glory? RT Sport examines further.

Now in his 33rd year and likely his final World Cup, Cristiano Ronaldo craves nothing more than adding the most prestigious winner's medal of them all to his already overflowing trophy cabinet, but is he surrounded by enough talent to achieve this dream? The short answer is no, probably not.

Like Spain, Portugal failed to progress from their group four years ago, but they rebounded from that disappointment a couple of years later by winning the European Championships in France without truly impressing throughout the duration of the tournament.

One of the world's finest players, Ronaldo's international teammates won't supply anything near the level of talent he enjoys when he pulls on a Real Madrid jersey in La Liga, but the Portuguese squad is not without its own bright sparks.

They are heavily favored to emerge from Group B, but a trip to the quarter-finals is likely the best that the Portuguese fans can hope for.

In addition to the Real Madrid superstar, Manchester City's Bernardo Silva and the Wolves' Ruben Neves are more than capable of emerging as stars in this tournament, as the Portuguese move ever closer to the dreaded post-Ronaldo era.

Spain, the 2010 champions, will be hoping to eradicate all memory of their disastrous showing in Brazil four years ago, where they were eliminated from the tournament in the group stages with just one win (against Australia) to show for their efforts. Whereas four years ago Spain was something of a fading force, particularly in midfield, aging players such as Xavi and Xabi Alonso have been replaced by the considerably more youthful Isco and Koke, all of whom will be guided by Julen Lopetegui, who coached several Spanish underage teams.

The Spaniards possess about as much talent in their squad as any nation in the tournament, but the key to how far they progress through the rounds will be whether Lopetegui can have his players firing on all cylinders, while simultaneously managing the egos in his group.

Where do we begin? Spain boasts the world's best goalkeeper in David De Gea, as well as the likes of Gerard Pique and Sergio Ramos in front of him, but it is the mercurial talents of the legendary Andres Iniesta that infuses the Spanish team with the attacking verve necessary to thrive.

This summer's tournament marks the first World Cup in 20 years that Morocco has qualified for, and it comes at a time in which Moroccan football is booming. Last February, Morocco claimed their first ever African Nations Championship, earning the title with a resounding 4-0 victory against Nigeria in the final, suggesting that this is a golden era for the North African side.

While Spain and Portugal are justifiably the favorites to progress from Group B, the Atlas Lions are big game hunters that are more than capable of pouncing on any mistakes made by the big boys.

Morocco's biggest strength is a defense that contains the likes of Juventus powerhouse Medhi Benatia and the emerging talent of Real Madrid starlet Achraf Hakimi. Creativity abounds in midfield, but a lack of threat in the final third could be their undoing in a difficult group.

Now in their fifth World Cup, Iran has failed to qualify from the group stages in any of their other appearances, and it is difficult to see that run of poor form changing in Russia. The fact that they are being guided by former Real Madrid coach Carlos Queiroz suggests that they will be organized and tough to break down, but the gulf of class which exists between the Iranians and the other three teams in this group suggests that their visit to Russia will be a brief one.

Sardar Azmoun, who plies his trade in Russia with Rubin Kazan, is already Iran's fifth highest scorer of all time at just 23 years of age. He has been hailed by some in the media as a 'young Zlatan Ibrahimovic' or the 'Iranian Messi', as well as the successor to Iran's serial goalscorer Ali Daei. No pressure, then.