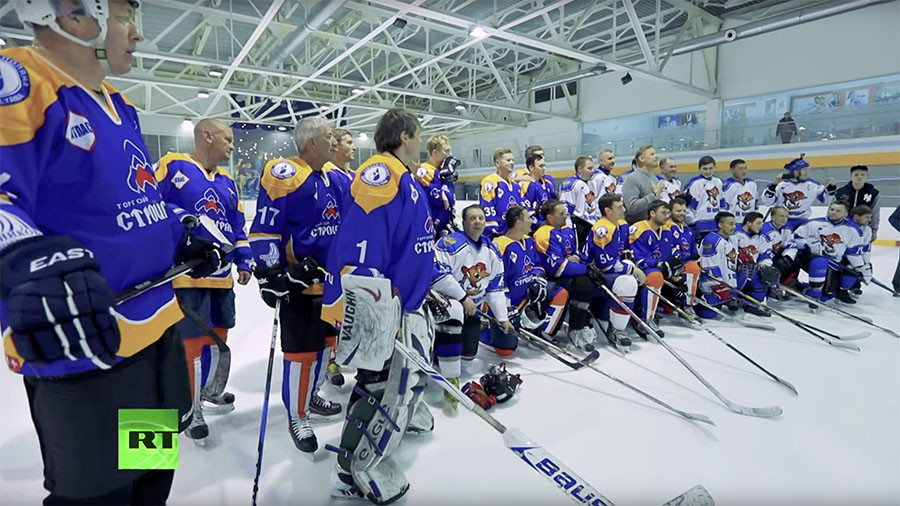 Danish football legend Peter Schmeichel continues to explore local culture in the Russia 2018 World Cup host cities. This time, Schmeichel hits the ice to quite literally try his famous safe hands at being a hockey goalie.

After being impressed by the stadium’s readiness for the World Cup - the ground was the venue for the Russian Cup on Wednesday - the victorious Euro '92 goalkeeper embarked on a boat trip to view the city’s from the famous Volga waves.

Schmeichel, a five-time Premier League winner between the sticks at Manchester United, showed that his love of goalkeeping had not died since hanging up his gloves. He tried his skills on the ice by joining in the practice at the local hockey club 'Tsaritsyn'.

The slippery surface and unpredictable puck turned out to cause ‘The Great Dane’ serious problems, preventing Schmeichel from turning his goalkeeper talent into goaltending talent, and the former footballer had to concentrate more on maintaining his balance, rather than catching the puck.

After admitting that he needs to improve his skating technique, Schmechel went to a golf club to “get his self-respect back” after his ice hockey fail.

Volgograd was named Stalingrad from 1925–1961 before being renamed to Volgograd after the river Volga, on which the city stands. Located in the southeast of the European part of Russia, it has the status as a hero city in recognition of an outstanding feat committed by the Soviet soldiers during World War Two.

The city was completely destroyed during the battle of Stalingrad, which marked the turning point in the war presaging the future victory against Nazi Germany. More than 1 million Soviet soldiers sacrificed their lives to win the fierce battle in Stalingrad, turning the tide in favour of the Soviet Union.

The Motherland Calls statue, which is the city’s main symbol, was built on Mamayev Kurgan in 1959 to commemorate the soldiers’ unfadable act of courage during World War Two. It is one of the biggest monuments in the world and the tallest statue in Russia and Europe.

READ MORE: 5 firsts you will see at the Russia 2018 World Cup (PICTURES)