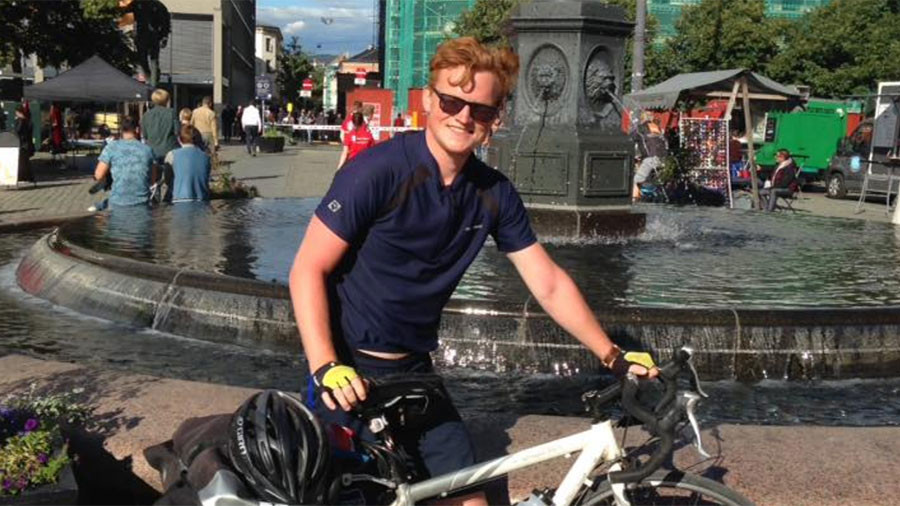 Two England fans are preparing to saddle up and cycle from the UK to Russia for the 2018 World Cup on a journey that will take them 3,800km across five countries, before arriving in time for England’s game versus Tunisia.

Despite fans from the UK accounting for only a small percentage of ticket buyers for the tournament this summer, die-hard Three Lions duo Jamie Marriott and Mitchell Jones will set off from Emsworth, Hampshire on May 25 in a bid to see their heroes in Russia.

just in case you haven’t heard... I am cycling to russia for the world. It is in print, it must be true... or you can read a little more here. https://t.co/ukQu1BvXng pic.twitter.com/5W8UFboaCv

Their journey will take them through France, Germany, Poland and Ukraine for the game with Tunisia in Volgograd on June 18. Their efforts will raise money for the Bobby Moore Fund for Cancer Research.

In spite of Western press efforts to discourage fans from travelling to Russia, the cycle team are looking forward to acquainting themselves again with Russian hospitality, as the two previously travelled through Russia before taking part in the Mongol Rally car race.

“Everyone was really, really nice – they are very, very hospitable people,” said 28-year-old Marriott, who lives and works in Berlin. He added it was tempting to begin the course from Germany, but will instead set off from his home village of Emsworth.

READ MORE: ‘It’s nothing like what’s been reported’ – Arsenal Fan TV’s Robbie to RT on football in Russia

Previously, the pair cycled from Lands End to John O’Groats, the most southerly and northerly points in the British Isles respectively, to raise money for the fund. The World Cup journey will be dedicated to the memory of Jones’ youth football coach.

The football-mad lads would probably have made the decision to travel to support England on their own initiative – having made the trip to the 2016 European Championships in France. However, English teacher Marriott, said it was a lightbulb moment from his girlfriend that sparked the idea of the cycle mission to Russia.

“It was my girlfriend’s idea – she said, ‘Why don’t you cycle?’ – and I thought, ‘That’s a brilliant idea,’” he said. “I’ve had a bit of cycling experience – I did Land’s End to John O’Groats about four years ago with the same guy.

“At the moment, the plan is to get up early when the sun rises and have a casual cycle until it’s dark. We are confident – that’s the only way of going into it.

"There will be ups and downs along the way, bike malfunctions, but with the grit and determination and drive that we have, we’ll get there. There’s a lot of people who don’t really believe it. My mum is going through the roof,” he added.

Marriott and Jones are planning to arrive for England’s first World Cup game, four days after the tournament’s opening game on June 14, when Russia take on Saudi Arabia in Group A at Moscow’s Luzhniki Stadium.

Despite the mammoth mileage they will clock up on the trip, the pair will still have some way to go to beat Egyptian Mohamed 'Ibn Nufal' Nufal. The adventurer set off on two wheels from Cairo in April and will travel 5,000km through Jordan, Bulgaria, Romania, Moldova and Ukraine to Russia 2018.