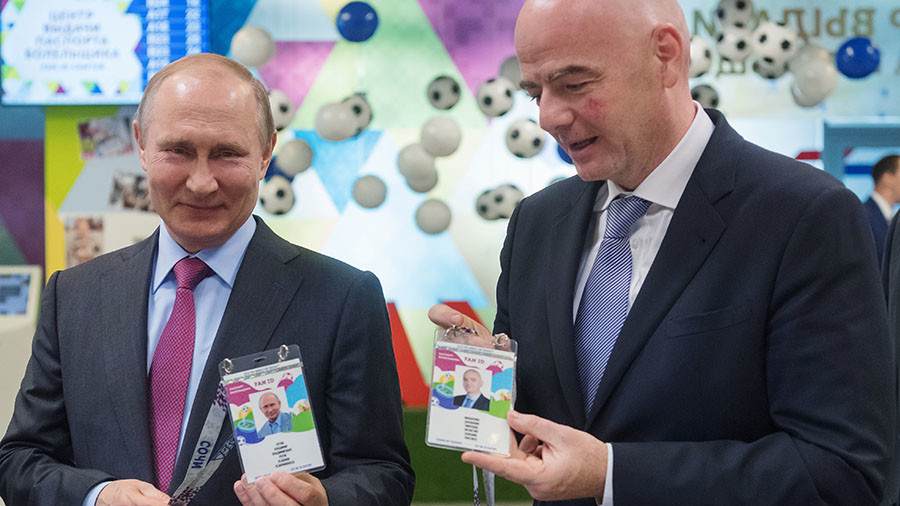 Russian President Vladimir Putin has insisted that Russia is ready to host the 2018 World Cup, as the country applies the finishing touches to infrastructure ahead of the tournament this summer.

Putin was speaking while visiting the south Russian resort town of Sochi, one of the 11 host cities for the tournament, with FIFA President Gianni Infantino. They attended a meeting of the Supervisory Board of the Russia 2018 Local Organizing Committee.

Read more
2018 World Cup – 50 days to go: The spectacular stadiums that will welcome fans in Russia

“Preparations for the World Cup, which this year will be held in our country, are practically complete. Russia is ready for the tournament,” Putin said.

“A lot has been completed, and now begins the most demanding stage – putting the finishing touches on all the infrastructure required to host an international tournament,” he added.

Addressing regional governors attending the meeting via videolink, Putin said that the pressure of hosting such an event will continue to grow, adding: “The situation demands constant attention and your personal participation in organizing this work.”

FIFA boss Infantino concurred, confirming that Russia is “absolutely ready” to host the tournament, which will kick off at Luzhniki Stadium on June 14 and run through July 15.

The city of Sochi boasts the beautiful Fisht Olympic Stadium, one of 12 designated Russia 2018 host venues. It has already hosted the 2014 Winter Olympic Games and the 2017 Confederations Cup, which was a precursor to the World Cup.

There, both Infantino and Putin received their FAN IDs, a new system for the World Cup, which is obligatory for fans in order to access stadiums.

For foreign fans, the FAN ID will provide free visa entry to Russia and all fans will be able to book free transport between host cities with FAN IDs, provided they have a valid match ticket to a game in that city.

The first FAN ID was handed out in Finland in February to a local fan named Jouko, who had planned his trip in advance and also received a certificate for a crash course in the Russian language organized by the center.

Russia v Saudi Arabia will kick off the 2018 World Cup at Luzhniki Stadium, where the host nation will bid to make it out of the group stage at a World Cup for the first time in their history.