2018 World Cup – 50 days to go: The spectacular stadiums that will welcome fans in Russia 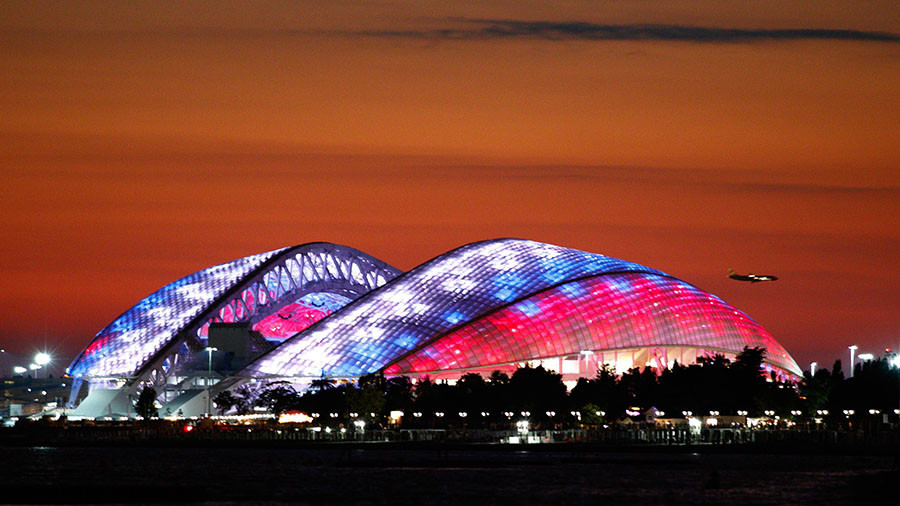 With just 50 days to go until the 2018 FIFA World Cup kicks off in Russia, RT Sport looks at the 12 spectacular stadiums in 11 cities that will host games at this summer’s footballing showpiece.

Luzhniki will be the centerpiece stadium for the World Cup. Opened in 1956 as the Central Lenin Stadium, the venue has a storied history and has hosted major sporting events down the years, including the 1980 Summer Olympics and the 2008 UEFA Champions League final. It closed in 2013 for major renovation work ahead of this summer’s World Cup, and reopened in November of last year.

The capacity has been increased from 78,000 to 80,000, and major changes have been made to the structure, including removing the athletics track from around the pitch and bringing the seats closer to the action. The roof will provide a spectacular light show at night. The stadium’s historic façade has been maintained, however, as has the statue of Lenin outside, which greets visitors making their way to the arena.

Luzhniki will host seven games at this summer’s tournament, including the opening game and final.

Located in the Tushino district of Moscow, Spartak Stadium is home to Russia’s most successful football club, Spartak Moscow. It opened in 2014, and hosted games at last summer’s FIFA Confederations Cup. The red and white cladding around the stadium matches the colors of its host team, and the statue of the gladiator Spartacus outside the ground also leaves visitors with no mistake as to who the tenants are. However, when the Russian national team play there, the façade can switch to a color scheme in keeping with the nation’s flag.

It will host five games at the World Cup, including a mouthwatering opener between Argentina and Iceland on June 16.

Russia’s western exclave of Kaliningrad lies between Poland and Lithuania on the Baltic coast. Formerly known as Konigsberg, the city changed hands from Germany after World War Two. Kaliningrad Stadium stands on Oktyabrsky Island near the center of the city, and will be at the heart of a major development of the area once the World Cup has ended. The exterior design appears basic during the day, but the stadium façade is illuminated at night to provide a stunning spectacle.

The venue is the new home of Russian second-tier club FK Baltika Kaliningrad, and held its first test game on April 11, when the team faced Krylia Sovetov.

The original plan was for the stadium to hold 45,000 – in line with FIFA minimum requirements – but that was reduced to 35,000 after design changes and FIFA made an exception. After the World Cup, the capacity will be further reduced to around 25,000.

It will host four group-stage games at the World Cup, including the eagerly-awaited England-Belgium clash on June 28.

The hand of history rest heavy in Volgograd, which was formerly known as Stalingrad and was the scene of one of the most decisive – and brutal – battles of the Second World War. That history is evident in the location of the Volgograd Arena, which stands at the foot of the Mamayev Kurgan war memorial, which includes the giant ‘Motherland Calling’ statue.

It was built on the site of the former central stadium and the façade has a lattice design reminiscent of the Bird’s Nest Olympic stadium in Beijing.

It will be home to Russian lower-league team FC Rotor after the World Cup. It hosted its first test match on April 21, when Rotor met Luch-Energiya of Vladivostok.

It will be the venue for the Russian cup final on May 9, Victory Day, and will host four group-stage games at the World Cup. After the tournament, the capacity will be reduced to around 35,000.

One of the World Cup’s most distinctive venues, Ekaterinburg Arena is the World Cup’s easternmost stadium. It stands in Ekaterinburg, a city of around 1.4 million to the east of the Ural Mountains. Originally opened in 1957 as the Central Stadium, it has been extensively refurbished for the World Cup, including the novel addition of temporary stands which extend outside the stadium to ensure added capacity. The classical-style façade largely remains, including its impressive ornate statues.

The stadium officially reopened on April 15, when host team FC Ural beat Spartak Moscow 2-1. It will see four group-stage games at the World Cup. After the tournament, the temporary stands will be removed to reduce the capacity.

World Cup venue Sochi lies on the Black Sea coast and will be a popular destination for football fans keen to soak up some sunshine this summer. The city’s Fisht Stadium was originally built for the 2014 Winter Olympics and hosted the opening and closing ceremonies. Since then it has been converted into a football stadium and hosted games at the 2017 FIFA Confederations Cup.

It is located in the city’s Olympic Park, and although its permanent post-World Cup tenants have not been confirmed, there is talk that second-tier club Dynamo St. Petersburg could up sticks and move to the city.

The stadium is named after a mountain in the region, and the design is in the theme of snow-capped peaks. It will host six games in all this summer, including the blockbuster game between Iberian rivals Portugal and Spain, as well as a quarter-final.

Kazan is the main city of the Republic or Tatarstan, and prides itself on being Russia’s “sporting capital.” Kazan Arena stands on a bend in the Kazanka River, and is home to local Russian Premier League team Rubin Kazan. The venue opened in 2013 and hosted events at the Summer Universiade of that year. It has also previously been converted to host international swimming events.

The stadium façade boasts the largest outdoor screen in Europe. It hosted matches at last year’s Confederations Cup, and will hold six games this summer, including a quarter-final.

The most problem-hit of all Russia’s World Cup stadiums, construction in Samara has seen beset by delays which have meant the pitch was only recently laid. The arena will finally hold its first test match only on April 28, when new tenants Krylia Sovetov take on Fakel in the Russian second tier.

The stadium design is, however, spectacular, and incorporates the theme of space in honor of the region’s role a key Russian aerospace center. The dome-shaped design extends 65 meters up, and is illuminated at night to provide spectacular show.

Samara itself is a lively city of 1.1 million, and stands at the confluence of the Samara and Volga rivers. Its riverside promenades will be a particular draw for visiting football fans.

Samara Arena will host six World Cup games, including Russia against Uruguay in the group stage, and one quarter-final.

Of all of Russia’s World Cup host cities, perhaps the least is known about Saransk, even among Russians themselves. The city has a population of just 300,000, and is the capital of the Mordovia Region – after which the new stadium is named.

The stadium’s exterior is a fiery mix of orange, red and white, in keeping with “the distinctive color palette of Mordovia’s arts and crafts,” according to the FIFA website.

After the World Cup it will be home to lower league local club Mordovia, and the capacity will be reduced to a more realistic 25,000 given the size of the new inhabitants.

The arena stands on the banks of the Insar river, and city authorities have described the new venue as “a new center of gravity” for the city.

It held its first test match on April 21, and will host four group stage games at the World Cup.

Nizhny Novgorod is one of the most intriguing host cities at Russia 2018, and is a place with a rich history as a trading center and later as a key military production facility during the Soviet Union.

The city has a population of around 1.2 million, and stands on the banks of Volga and Oka rivers. The location of the brand new Nizhny Novgorod Stadium is spectacular, overlooking the river and with a backdrop of the city’s  Kremlin on the opposite bank.

The design is distinctive, with a semi-transparent façade with shades of blue and white, in keeping with the themes of wind and water.

It will be home to Russian second-tier club Olympiets after the tournament, and is also planned as a venue for various events such as major concerts.

It held its first test match on April 15, and will host six games at the World Cup, including a quarter-final.

Rostov Arena is the brand new stadium built for World Cup games that will be held in Rostov-on-Don, a city which lies 1,000km to the south of Moscow, on the banks of the mighty Don River.

The stadium will be home to local club Rostov, who play their football in Russia’s Premier League and who in recent seasons have welcomed European giants such as Bayern Munich and Manchester United in European competitions.

The stadium design has a ripple-type effect which mimics the flow of the Don River, according to designers.

The first test match was held at the stadium on April 15, when Rostov took on SKA Khabarovsk. It will see five games at the World Cup, including a round of 16 match.

St. Petersburg Stadium – also known as Krestovsky Stadium – is one of the biggest and most stunning World Cup venues. Home to local Russian Premier League team Zenit St. Petersburg, it opened its doors in 2017 after years of delays and cost overruns, and is reportedly one of the most expensive stadiums anywhere in the world, supposedly coming in at a cost of more than $1 billion.

Standing on the iconic city’s Krestovsky Island, it has a retractable roof and is a stunning sight, with its futuristic design with upwardly protruding spikes resembling a spaceship.

It hosted the opening game and final of the 2017 Confederations Cup, and will be at the center of plenty of World Cup action this summer, hosting seven games, including a semi-final and the third place play-off. It will host games at the 2020 UEFA European Championships.