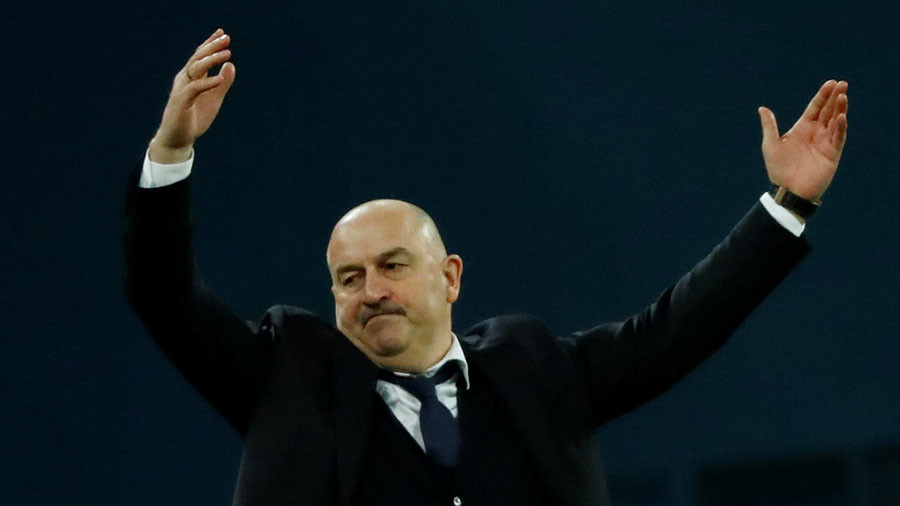 Russia’s defeat against France on Tuesday extended the team’s winless run to five games and led to questions over whether the 2018 World Cup hosts are set for a disappointing showing at this summer’s tournament.

Strikes from teenager Kylian Mbappe either side of a Paul Pogba free-kick goal condemned Russia to a 3-1 defeat in St. Petersburg, with the hosts scoring through striker Fedor Smolov.

It was the second time in four days that Russia had conceded three goals in a game, following the 3-0 drubbing by Brazil in Moscow on Friday night. The defeat against France signalled the team’s eighth loss in 18 games under head coach Stanislav Cherchesov.

Following the game, the more scathing headlines in the Russian press included: “No result and no hope.”

Any hopes of the team building momentum after a promising 3-3 draw with Spain in November have now been replaced by fears that Russia could struggle to make it out of a World Cup group that includes Saudi Arabia, Egypt and Uruguay.

So what are the key issues for Russia, and can they be rectified in time for the opening World Cup game against Saudi Arabia on June 14?

While most people didn’t expect Russia to beat Brazil and France – two of the favorites for this summer’s tournament – conceding six goals and scoring just one in those games means Cherchesov is under pressure to address defensive frailties that have been exposed.

Cherchesov has suffered the misfortune of seeing two of his first-choice central defenders, Georgy Dzhikiya of Spartak Moscow and Viktor Vasin of CSKA Moscow, both suffer long-term knee injuries that will rule them out of the tournament this summer.

The pair would usually form part of a back three for Russia in a 3-5-2 formation, meaning the Russian head coach has been left scrambling for replacements.

Cherchesov has settled on a partnership between Rubin Kazan’s Fedor Kudryashev and Vladimir Granat as two of the three – the latter making his return to the national team after a four-year absence – but seems uncertain as to who will play alongside them.

Spartak’s Ilya Kutepov lined up against Brazil, putting in a decent first-half performance in keeping the Brazilians at bay for 45 minutes. Roman Neustadter came in against France – although he suffered a night to forget as Mbappe danced past him for his two goals.

Brazilian-born defender Mario Fernandes missed both games through injury, but will return before the World Cup and is many people’s pick to add some much-needed mobility to the backline.

Those three will all likely be in the final World Cup squad announced towards the end of May. However, Cherchesov will need to use remaining friendly games against Austria and Turkey - in May and June respectively - to settle on a definite backline trio and work on them operating as a much tighter unit.

The 28-year-old Krasnodar striker has provided seven of the 25 goals scored during Cherchesov’s 18 games in charge, and is revered by a number of European clubs - including West Ham United.

His goal against France – his 12th in 30 appearances for Russia – was typical of his sharp movement in the box as he darted into space at the back post to connect with a cross from wingback Igor Smolnikov.

However, that kind of service into Smolov was a rarity in the two recent friendlies, and more threat is needed from elsewhere on the pitch.

In particular, Russia will want better returns from attacking midfielders such as Alexander Golovin, Alan Dzagoev, and Aleksey Miranchuk – especially as defensive weaknesses mean the team are liable to leak goals at the World Cup against Uruguay’s strike duo of Luis Suarez and Edinson Cavani, and Egypt’s free-scoring frontman Mohamed Salah.

Cherchesov inherited a team at rock bottom when he took over in 2016, with Russia finishing bottom of their group at the European Championships in France. He then faced a host of retirements from stalwarts of the side including defenders Aleksei and Vasili Berezutski and Sergei Ignashevich.

In attempting to rebuild the team, Cherchesov has used 45 different players in his 18-month tenure. In that respect, Russia’s lack of a World Cup qualifying campaign has proved a double-edged sword. Friendly games have added to the temptation to try different players and tinker with combinations, which has led to a lack of continuity.

Players have been recalled to the team, only to disappear further down the line, while others such as Neustadter and Konstantin Rausch, both of whom have been naturalized to play for Russia, have been brought in for what appears to be attempts at quick fixes.

There are established names on the teamsheet and players that form the core of the squad – notably veteran goalkeeper Igor Akinfeev, Alexander Golovin and Denis Glushakov in midfield, wide men Alexander Samedov and Yuri Zhirkov, and Smolov up front.

But speculation continues over who exactly will fill other key positions, despite just 11 weeks to go until the team kicks off against the Saudis.

Striker Artem Dzyuba – who is enjoying a revival at Arsenal Tula on loan from Zenit St. Petersburg – could be brought back into the fold, although that would mean settling reported personal differences with Cherchesov.

Many are also clamoring for in-form Lokomotiv Moscow midfielder Igor Denisov to return to the team. Denisov has made 54 appearances for the national side, but has not played under Cherchesov due to a falling-out the pair had while both were at Dynamo Moscow.

Essentially, Cherchesov’s options seem all too many and all too few – numerous players of a similar type, but, with the exception of Smolov, none who particularly stand out.

The time for experimentation is over, however, and in the friendlies against Austria and Turkey, Cherchesov will have to field 11 that closely resembles the team to start in the World cup opener at Luzhniki on June 14.

Most Russian fans understand the limitations of the squad at Cherchesov’s disposal, and are realistic about the team’s chances this summer.

Russia has exited the past four major tournaments – the 2014 World Cup, the European Championships in 2012 and 2016, and the 2017 Confederations Cup – at the group stage.

The team’s last significant achievement was a decade ago, when Andrey Arshavin’s star performances lit up the 2008 European Championships and helped the team reach the semi-finals.

Few would back Russia to repeat that feat at this year’s World Cup or even get beyond the last 16, particularly as they would most likely face Spain or Portugal should they get out of their group.

But reaching the knockout stage is seen as a minimum – especially given the relatively kind group draw the hosts have been given. Opening game opponents Saudi Arabia will be the lowest-ranked team at the World Cup, and occupy 69th place in the FIFA table, six places below Russia.

The Saudis suffered a 4-0 friendly defeat against Belgium on Tuesday, and the game at Luzhniki on June 14 would appear to be a banker for Russia. Second-game opponents Egypt offer a more difficult proposition, and showed against Portugal last week that they should not be taken lightly.

They led in that game through a Salah goal until an injury-time double from Cristiano Ronaldo spared Portugal’s blushes. Salah has scored 28 league goals so far in a prolific season for Liverpool, and the Egyptian forward’s pace will pose Russia’s immobile defense similar problems to the ones Mbappe offered in the game against France.

Slip-ups in either of the first two games could mean that Cherchesov’s team are left needing a result in the last group match against Uruguay to go through – which would be an unwanted scenario.

If Russia were to exit at the group stage this summer, it would no doubt dampen the festivities, especially for home fans, who would like to see the pride in their team reciprocated in performances on the pitch.

They have been looking for signs of encouragement from their team that something special might just happen. But instead in recent games they have seen a team that at best has stagnated, and at worst is going backwards.

Come June 14, Russia’s gleaming new stadiums and infrastructure will be ready for the big kick-off, but the biggest danger is that the nation’s team will not be.