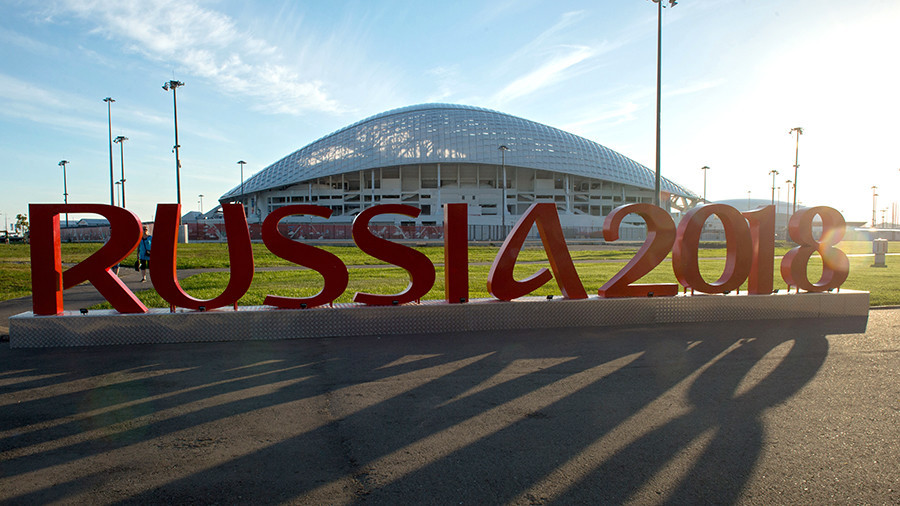 With exactly 100 days to go until Russia and Saudi Arabia meet in the opening game of the 2018 FIFA World Cup in Moscow, excitement and expectation are building across the country.

Four hundred kilometers to the east of the Russian capital, Nizhny Novgorod is one of the places holding a celebration to mark the ‘100 days to go’ milestone.

The city is among the 11 that will host Russia 2018 World Cup games, and countdown events are being held in the central Minin and Pozharsky Square, which will be a hub of activity as a fan zone during the tournament.

‘Nizhny’, as it is colloquially known, will host six games in all, including a quarter-final, at the striking new 45,000-seater Nizhny Novgorod Stadium which stands at the meeting point of the Volga and Oka rivers.

The arena cost a reported $290 million, and more has been spent on developing wider infrastructure in the region – part of the overall $13 billion outlay that Russia will be making to host football’s showpiece event.

Situated away from Russia’s traditional financial and sporting centers, Nizhny Novgorod and its new stadium serve as an insight into the lasting benefits organizers hope the World Cup will bring to the country – as well as the pitfalls they are hoping to avoid.

‘Legacy’ is a buzzword surrounding any major sporting event. Russia 2018 has been no exception, and mention of lasting benefits has been liberally applied to the FIFA material on the football showpiece.

Russia's journey to being World Cup hosts has not been an easy one. Upon being awarded the tournament, it did not have the existing stadiums for expense to be spared in construction.

Russian football clubs also do not consistently command large enough crowds that would ensure the new arenas blend seamlessly into the footballing landscape.

Total costs for hosting the World Cup are officially put at around 678 billion rubles (US$12 billion), of which over half (390 billion rubles) will come from the federal budget. The various regions hosting games will contribute 92 billion rubles, while private investment will account for 196 billion rubles.

To put that in context, Brazil spent around $15 billion to host the previous edition of the event in 2014 – a similar figure to Russia’s outlay.

In some areas, Russia’s investment appears to be secure.

There are ready-made legacies in places such as Moscow, where the $400 million refurbishment of the national Luzhniki Stadium – which will host the opening game and final – will ensure the venue will remain a fitting home to major sporting events in years to come.

Moscow's iconic 81,000-seater Luzhniki Stadium will host the opening game of the World Cup on June 14 and the final on July 15. © Serguei Fomine / Global Look Press

In hosts cities such as Rostov-on-Don, new stadiums will become home to local teams with a strong enough following to ensure that they go to good use long after the World Cup.

The white elephants in the room

In other areas, however, the World Cup legacy is under more scrutiny.

The World Cups in Brazil in 2014 and South Africa in 2010 both offer cautionary tales in that they left white elephant arenas - stadiums that were not used after the events - that continued to weigh heavily on public finances.

That is exactly the kind of scenario Nizhny Novgorod, among other places, will be trying to avoid.

After the World Cup, the city’s gleaming new Nizhny Novgorod Stadium will be home to local club Olimpiyets Nizhny Novgorod, who play their football in Russia’s second-tier National Football League.

The team’s last home game – played in nearby Dzerzhinsk – drew just 600 fans. Even factoring in an upturn in attendance provided by the new stadium and a spurt of interest in football after the World Cup, it would be hard to image the number of fans even coming close to filling the stadium each week.

Nizhny Novgorod Stadium will host World Cup games including England versus Panama on June 24. After the tournament, it will be home to local club Olimpiyets © Maxim Shemetov © Reuters

Empty stadiums are something, however, officials and locals themselves are confident will be avoided.

“Of course, the stadium won’t only be considered for football matches, but also as a venue for concerts, entertainment shows, and exhibitions,” Dmitry Svatkovsky, deputy governor of Nizhny Novgorod region, told RT.

“The large foyer area [in the stadium] will be used as a place for different exhibitions and markets, family celebrations and lots of other things. Apart from that, some of the space under the stands will be re-equipped for commercial use.”

So far, so practical.

But beyond that, the official also talked up wider benefits to the region which he believes will be felt by locals “for decades.”

“[The World Cup] will leave a huge legacy for the city. [There is] a new airport terminal, a new metro station, new sports facilities. All of this improves the quality of life for locals and gives an impulse for further development of the city.

“In a non-material sense, the World Cup will be a catalyst for the growth of interest in football and sport in general, which is the best advertisement for a healthy style of life.”

Local resident Alexandra Alekseeva, 26, a freelance translator and owns a flat nearby the stadium, says she also sees numerous benefits for the city as a World Cup host.

“I don’t know the exact cost, but I think it’s important for the development of the city… We have lots of new roads, they are renovating a lot of buildings, putting everything in order. Yes, maybe they could have saved some money on the stadium, but still…

“The memories will be great… we’ve never had such a great event for a long time, since the big trade markets that they used to hold here a long time ago,” she added, referring to the city’s historic role as an important trading center for Russia.

Alexandra also hopes the city’s newest architectural addition will not be left to stand idle.

“This celebration will be good, but of course we hope that things are used afterwards, so they use this stadium, but according to its plan.

“Football practically doesn’t exist in this city, it would be great if they used the stadium for sport, not for concerts, although that wouldn’t be too bad.”

‘A new center of gravity’

Organizers are applying similar logic to other areas, where they see the World Cup as a key driver not necessarily for football, but for the development of the region as whole.

Saransk is one example. There was widespread surprise among Russians when it was chosen as a World Cup venue, especially when other places such as Krasnodar – where there is a thriving football scene and stylish new stadium – were overlooked.

The city of around 300,000 will be among the smallest to hold World Cup games, but will perhaps provide one of the most fascinating experiences for fans through its mix of ethnic Russian and Mordvin cultures.

Games will be played at the new Mordovia Arena, named after the region of which Saransk is the capital.

The 44,000-seater stadium will be home to local club FC Mordovia after the tournament, when the capacity will be reduced to a more manageable 25,000 (a trick being repeated in other host cities such as Ekaterinburg).

There are skeptics who believe even that relatively modest capacity will leave the city with a headache.

However, the press service for the director of the city’s organizing committee told RT that the development of the venue has provided Saransk with much more than a football venue, and has given the city “a whole new center of gravity.”

“The Mordovia Arena is a multi-purpose venue. After the World Cup, it will be used as the home stadium for FC Mordovia, and also as a center for the hosting of international competitions and cultural events,” the press service told RT.

“Part of the space will be used for commercial purposes: cafés, restaurants, and other private businesses. In addition, the stadium has a social mission, including the development of children’s and youth football.

“The hosting of the World Cup will be a big impulse to the social and economic development of the region.

“Among the key positive changes that have already happened in Saransk and Mordovia thanks to the FIFA 2018 World Cup are the new and reconstructed urban infrastructure facilities.

“There’s the airport, the railway station, the streets and roads, and new hotels, as well as the stadium itself of course, which has given a new center for the city, a center of gravity with special energy.”

View of the Cathedral of St. Theodore Ushakov in Saransk. The city is set for a tourism boost during and after the World Cup. © Marius Becker / DPA / Global Look Press

The same story of much-needed investment is true elsewhere, including in Kaliningrad, the Russian exclave which lies between Poland and Lithuania on the Baltic Sea.

The city's new 35,000-seater stadium will go to local club Baltika Kaliningrad after the tournament, when seating will be reduced to 25,000. But it’s what’s happening around the venue that appears just as significant.

The stadium stands on Oktyabrysky Island, which although in the heart of the city has lay neglected for decades.

The World Cup will see the area developed into a residential complex, as well as new parks, quays and embankments for locals to enjoy.

It’s telling that Russia hasn’t seen anything of the protests that plagued Brazil in the build-up to the tournament in 2014, when even a football-obsessed nation balked at the large costs of an event when the funds were seen as crucial for elsewhere.

Instead, locals in cities such as Nizhny Novgord and Saransk are itching to welcome the world to their cities.

While it’s hard to see any kind of Russian footballing revolution in these areas when the World Cup bandwagon has rolled on, being a host city will mean much more than that.

It is about giving the cities a chance to join in a celebration the likes of which most of the population will not see again in their lifetimes.

It is also about reaping the benefits of newly developed areas and infrastructure, and bringing wealth and interest into areas away from Russia's traditional powerhouses.

“Nizhny Novgorod is Russia - and it’s this type of Russia that needs events like the World Cup.”