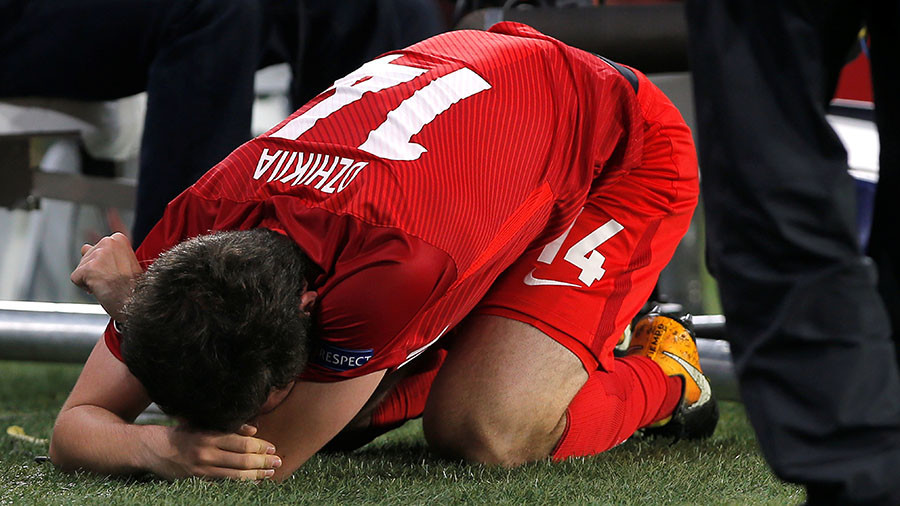 Russia's international defender Georgi Dzhikiya is a doubt for this summer’s World Cup after suffering what appears to be a serious knee injury in a friendly for club side Spartak Moscow in Abu Dhabi Thursday.

The 24-year-old was playing for Spartak against Shanghai SIPG when his leg reportedly gave way. One report suggested it may have been caused due to heavy watering of the artificial pitch before the game.

Video footage showed the player howling on the floor in agony and clutching his knee before being carried from the pitch on a stretcher. Later, Dzhikiya was seen hobbling towards an ambulance on crutches, with the player reportedly smiling.

Dzhikiya has 8 caps in an international career that began last year, and despite his inexperience, has become an integral part of Russia's defence. The Moscow native won the Russian Premier League with Spartak last season, their first title in 16 years.

The 2018 World Cup Russia begins in a little under 5 months when Russia take on Saudi Arabia on June 14 at the Luzhniki Stadium in Moscow.

The tweet, since deleted, featured a video in which the defender referred to three black teammates as “chocolates melting in the sun.”

Later, Spartak posted a video with Dzhikiya along with the players in question – Luiz Adriano, Pedro Rocha and Fernando – huddled together in a friendly manner.