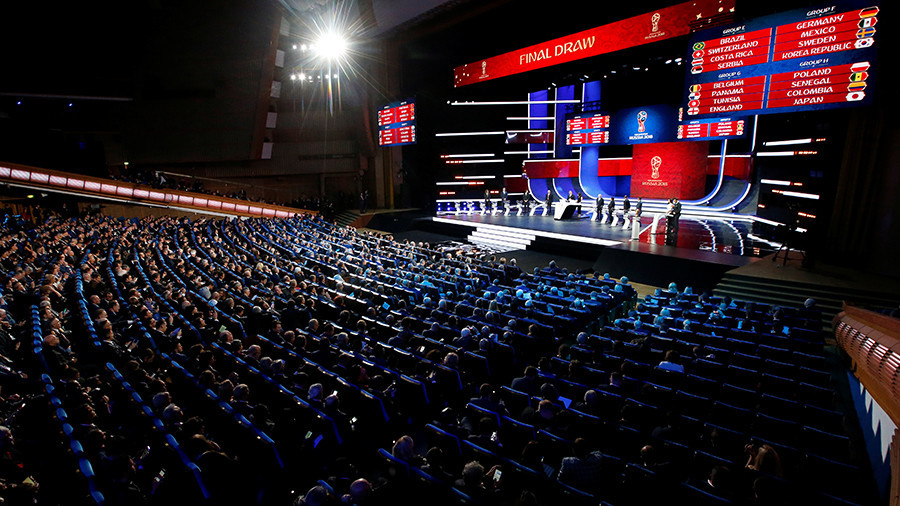 The World Cup Final draw took place at the stunning State Kremlin Palace in Moscow on Friday, which determined that Russia and Saudi Arabia will kick off next year’s World Cup at Luzhniki Stadium in Moscow on June 14.

All eight groups were revealed at the draw, and Russia will undoubtedly be pleased with the eventual outcome.

As host nation, Russia were automatically allocated Number 1 position in Group A, and were drawn alongside Saudi Arabia, Egypt and two-time World Cup winner Uruguay, who will likely pose the biggest threat to “Sbornaya.”

Qualification is surely a must for Russia given their group opponents, with only two-time winners Uruguay posing the biggest threat to “Sbornaya.” The draw provides Team Russia the perfect chance to advance to the knockout stage at of their home World Cup.

However, calamitous group stage exits at the last three major tournaments – the Brazil 2014 World Cup, the 2016 European Championships and their home 2017 Confederations Cup last summer – show that nothing is certain for Stanislav Cherchesov’s men.

The Final Draw ceremony was opened by FIFA President Gianni Infantino and Russian President Vladimir Putin at the Palace, which lies behind the Kremlin Walls in the heart of Moscow. To open the most significant World Cup event before the tournament itself, President Putin gave a powerful speech on its importance to the country.

Putin signed his speech off with the words: "I hope this World Cup will be the main factor in this beloved sport's development in our country... we await you in 2018," to applause from the watching crowd.

Then it was Infantino’s turn to address those in attendance, and the Swiss-born FIFA head took the opportunity to give his thanks to the Russian people. Never one to shy from demonstrating his Russian skills, addressed the crowd first in the nation’s mother tongue.

“Dorogie druzya (Dear friends),” began the Swiss-born official, before going on to assure the watching crowd that presenter Maria Komandnaya would show us the beauty of Russia, much to everyone’s agreement.

After thanking Mr Putin, the Russian government and all Russian people who have worked so hard for seven years since Russia won the right to hold the World Cup, Infantino signed off with “Spasibo, Rossiya!” (Thank you, Russia!), and after the crowd was treated to some traditional Russian dance, the draw got underway.

Presenter Gary Lineker provided some typical dry British humour when introduced alongside co-presenter and Russian journalist Maria Komandnaya. The Mexico 1986 World Cup Golden Boot winner joked that he would rather take a penalty in the World Cup Final than organize the Final Draw, such was the intricacy of its arrangement.

One of the most attractive of those is surely Spain versus Portugal, who were drawn number one and two in Group B along with Morocco. Completing the group was Iran, who have among their ranks Sardar Azmoun, the “Iranian Messi” who plays his club football in Russia for Rubin Kazan.

Russia weren’t the only team given a favorable group. France were drawn against Australia, Peru and Denmark in Group C, which must have pleased Blanc, a 1998 World Cup winner with Les Bleus.

Argentina were drawn in Group C, where Lionel Messi, who visited Moscow last month to present the official Russia 2018 World Cup ball, and teammates will face the Icelandic thunder clap as well as the mercurial midfield partnership of Luka Modric and Ivan Rakitic of Croatia. The Super Eagles of Nigeria completed that group.

La Albiceleste nemesis Brazil face Switzerland, Costa Rica, and Serbia in Group E. The great Pele, the only man to win a hat trick of World Cups – in 1958, 1962 and 1970 – was also in attendance in Moscow, and will surely be pleased with the result of that group for the Samba boys.

A group of particular interest is Group G, which comprises England, Belgium, Tunisia and first-time qualifiers Panama. Primarily a nation with a proud boxing legacy, Panama’s sporting legend is four-weight world champion Roberto Duran, known as “The Hands of Stone.”

“We are very happy I am thinking of the players, because they are happy too because we are here to learn,” Gómez said. “Duran is a champion and we are happy because we qualify for the first time and we have to respect him. The whole team are champions!”

It seemed as though fate drew Belgium manager Roberto Martinez with England, as the Spaniard spent 21 years playing and managing in British football with Swansea, Wigan and Everton, winning one FA Cup.

“The thing is, from now on, there’s going to be a lot of chemistry and a lot of banter between the English players in the dressing rooms,” he said.

"We want the players working hard for each other, as well as enjoying the responsibility of being seen as one of the best generations of English football.”

England manager Gareth Southgate agreed that the current generation of Belgian players is perhaps the best there has ever been, admitting, “They are number one in the group for a reason.”

“It’s a great challenge for us, we know all of their players and the coach really well. I know his assistant even better. For us it’s a game that will capture the imagination. The other two teams [Tunisia and Panama] we will have to study really well,” said Southgate, a former England defender.

Current champions Germany will begin their title defense against Mexico, Sweden and South Korea. Die Mannschaft head coach Joachim Low believes the Swedes have very strong players, even if he “can’t pronounce their names.” Mexico will return to Russia after playing at the 2017 Confederations Cup, whereas South Korea’s last was even more recent, for a friendly in October.

Poland, Senegal, Colombia and Japan were chosen for Group H, giving perhaps the most eclectic mix of cultures and nationalities. Goal machine Robert Lewandowski’s first match of the tournament will be in Moscow, versus Senegal.

As well as that match, Moscow will welcome a wealth of talent during the tournament. Not only hosting the opening game and final of the tournament, but also host Cristiano Ronaldo’s Portugal, Argentina, Croatia, Germany, and Poland, ensuring that the eyes of the footballing world will be fixed firmly on the heart of Russia.

In the end, the pots lay empty and the groups full. As the snow fell from the Moscow sky, the Russia 2018 World Cup became a little clearer in the winter darkness, and now the greatest show on Earth awaits the world next year.