‘We heard about hooligans & racism, but no incidents, all ran smoothly’ – FIFA chief Infantino 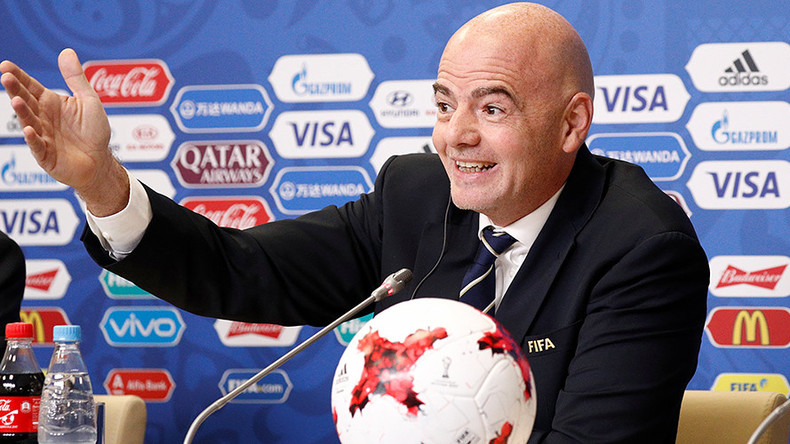 FIFA President Gianni Infantino has commended Russia on a smoothly run tournament and the absence of violent or racist incidents during the 2017 FIFA Confederations Cup.

Sunday’s Confed Cup final will see Germany take on Chile at St. Petersburg Stadium in the climax of the first ever Confed Cup to be held in Russia.

In a press conference held at the stadium wrapping up the tournament, Infantino said there had been no serious incidents at the competition, which dispelled any doubts about Russia’s ability to organize and hold a major football tournament.

“Spasibo (Thank you), dobro pozhalovat (welcome). This Confederations Cup here in Russia in the four venues of Kazan, St. Petersburg, Sochi has been a great success, from many points of view,” said Infantino, practicing his Russian.

“We heard about the infrastructure, that it is not ready, not working – the transport works, there is free transport between cities. This doesn’t happen in many other countries where events are organized, but it happened here.”

Questions had been raised in the Western media regarding Russia’s readiness to hold a major football event.

Infantino paid tribute to the altogether different atmosphere experienced during the tournament, and expressed enthusiasm at the prospect of seeing the same welcome at the World Cup in Russia in a year’s time.

“Look at all the volunteers, the smile they have the willingness to help, this is the face of Russia. We had 6,000 volunteers from 78 different countries, this shows the interest and enthusiasm in the country for football and for the Confederations Cup,” he added.