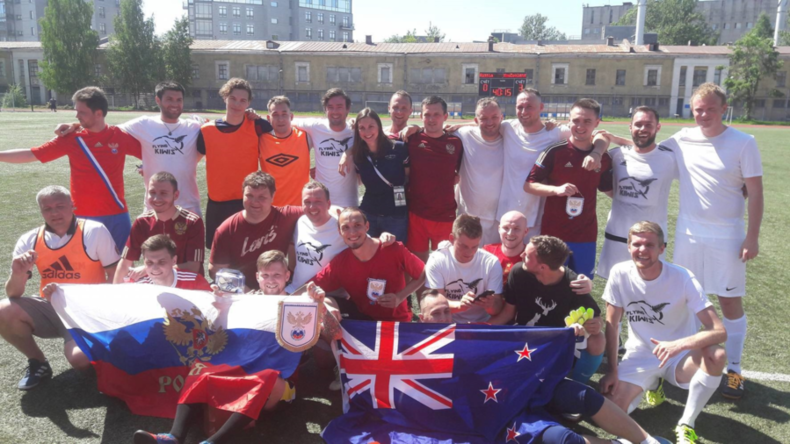 A small but hardy band of 'All Whites' fans made the 16,000km journey from their homeland in the Southern Hemisphere to the Confederations Cup opener in St. Petersburg.

New Zealand played Russia in the FIFA 2017 Confederations Cup opener in St.Petersburg, and although their side eventually lost 2-0 to the hosts, the Flying Kiwis scored a victory of their own.

Weeks in advance, the group had arranged to play an 8-a-side match at Dinamo Stadium in St. Petersburg, and surprised themselves by beating a local team 3-0, taking the edge off their disappointment at the national team’s 2-0 loss to Russia.

“We came open-minded, and we’ve been greeted warmly,” said Matt, a member of a fan group who call themselves the Flying Kiwis and who organised . They are following New Zealand, who are in the tournament as the Oceania champions.

“We had faith in the Russian people, and we have been proven right,” added Fred, another member of the group, when asked if negative publicity in the media about the country could have discouraged them from making the trip.

'We like it so much we wanna stay' Matt & Fred, 2 Kiwis in SPB for #ConfedCup, organisers of match between NZ and Russian fans pt.1 🇷🇺🇳🇿 pic.twitter.com/QMV44woMqn

A column by sportswriter Kris Shannon in the New Zealand Herald recently claimed that Russia "did not deserve" to host next year's World Cup, due to its fans’ history of misbehavior.

Prior to attending the match at the 68,000-capacity sold-out Krestovsky Stadium, neither Matt nor Fred had ever been at a “real football ground” the size of Dinamo Stadium, noting that all the soccer stadiums in New Zealand are shared with rugby teams, or worse – converted from cricket pitches.

Their comments echoed those the of All Whites coach Anthony Hudson, who also praised Russia's "unbelievable" new stadiums in an interview with RT, noting that he hadn't personally encountered "any negativity around the tournament, which is going to be really well-run."

The fans arrived two days in advance – and have had a chance to enjoy arguably Russia’s most picturesque city at an unusually spectacular time.

“The White Nights are incredible – I learned about that when the sun didn’t go down,” said Matt. “Even though we speak different languages, the people here have tried to help any way they can.”

The two now hope that the All Whites can manage to squeeze through the intercontinental playoffs, and make it through to the Russia 2018 World Cup.

“If this trip is a sign of what’s to come, let’s hope that we are back next year, too,” said Fred.

RT's Neil Harvey and ex-Premier League star Stan Collymore chatted with Zenit fans about the issues of racism and hooliganism in football, and the bias against Russia in the media.

Aleksandr, a devoted Zenit fan, said that the media treats Russia unfairly by portraying it as a place full of racial hatred and violence.

“It’s just the media, the news showing us nonsense really. We only don’t like our rival club Spartak. Everyone will be welcome at the World Cup,” he said.

Touching on Zenit ex-forward Hulk’s remark that he encountered racism almost in every game he played in Russia, Aleksandr said, “Everyone loves Hulk in our country, we’ve never had such a star player here.”

As for the racist chants, “there’s enough hooligans and fools everywhere,” he said.

Media reports that Russian fans are prone to violence are untrue, Aleksandr said, referring to the cordial welcome for Manchester United fans by Rostov FC during their Europa League last 16 match in March.

“Russian fans were giving out blankets to Manchester United fans to keep them warm,” Aleksandr said. “So how can they talk about fights and some kind of fear for children?”