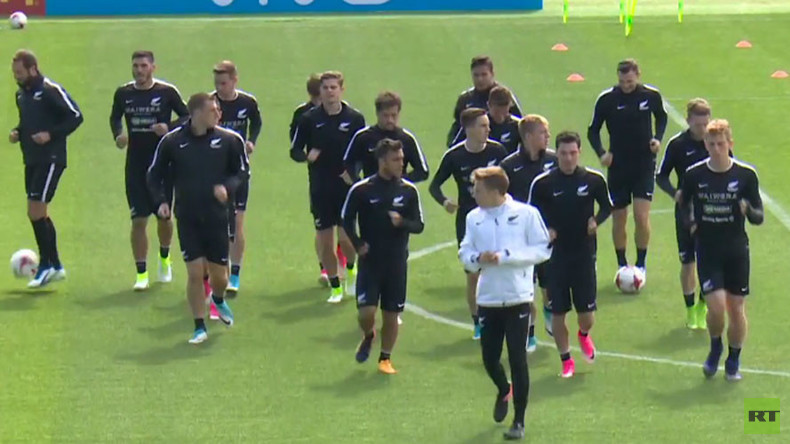 After the New Zealand national team arrived in Russia ahead of their FIFA 2017 Confederations Cup curtain-raiser with hosts Russia in St. Petersburg, we look at how the 'All Whites' booked their place at the tournament.

The ‘Tournament of Champions’ will welcome eight representatives from all corners of the globe: the champions of each six continents, plus world champions Germany and host nation Russia provide the eclectic mix taking part in the 2018 World Cup rehearsal.

None have traveled further than the New Zealand team, who have made the 16,000km journey from the Southern Hemisphere - via a training camp in Belfast and a firendly match in Belarus - to St. Petersburg Stadium to take on the Russian ‘Sbornaya’ at 18:00 on Saturday to kick off the tournament.

VIDEO I The #AllWhites into training in St Petersburg as they get ready for Russia on Saturday #ConfedCup pic.twitter.com/mcvh2dlv4j

New Zealand, nicknamed the ‘All Whites’ on account of their kit color, or lack thereof, booked their place at the Confed Cup by winning the 2016 OFC Nations Cup, the 10th edition of the quadrennial tournament organized by the Oceania Football Confederation (OFC).

The Kiwi team finished top of their group ahead of the Solomon Islands, Vanuatu and Fiji, before beating New Caledonia 1-0 in the semi-final to set up a final date away to Papua New Guinea.

In the final at Sir John Guise Stadium in Port Moresby, the All Whites narrowly beat Papua New Guinea on penalties after the game finished goalless, with midfielder Marco Rojas - dubbed 'the Kiwi Messi' - eventually converting the winning spot kick. The hero of the shootout being New Zealand keeper Stefan Marinovic.

Although New Zealand are undoubtedly minnows of the footballing world, operating in the shadow of the country’s more successful ‘All Blacks’ rugby team, they have one of the brightest young managers in international football in Anthony Hudson.

Englishman Hudson believes many have been quick to write off his team, who enter the tournament as the lowest-ranked side in the FIFA world rankings, where they occupy 95th place.

“You can expect a team that is capable of beating some of the best teams in the world, and that is going to this tournament to make New Zealand proud,” Hudson said when talking to RT Sport on what to expect from his side in Russia.

New Zealand currently sit top of their Russia 2018 FIFA World Cup Oceania qualifying group, and in June have played competitive games against Northern Ireland and Belarus, on both occasions only narrowly losing 1-0.

“We go into this tournament wanting to do something significant, which is do something New Zealand has never done, and that is win a game at the tournament,” Hudson said after the friendly defeats.

Midfielder Clayton Lewis said: “The Confederations Cup is a big event. There is only one tournament bigger and that is the World Cup, so this tournament is a great opportunity for exposure. I hope to catch the eye of some people around the world and take that opportunity.”

The team arrived in Russia in confident mood, despite being drawn in a difficult Group A alongside hosts Russia, European champions Portugal captained by Ballon d’Or holder Cristiano Ronaldo, and a strong Mexico side.

New Zealand will play Russia at St. Petersburg Stadium, before playing Mexico at Sochi’s Fisht Olympic Stadium on Wednesday, June 21. By the time the side have traveled back to St. Petersburg to round off their group campaign against Portugal on Saturday June 24, they will have clocked up over 20,000km since beginning their journey.

Hudson’s All Whites have certainly not arrived in Russia to make up the numbers, and will be aiming to crown their mammoth travel by causing upsets that will surely announce themselves on the international footballing stage.