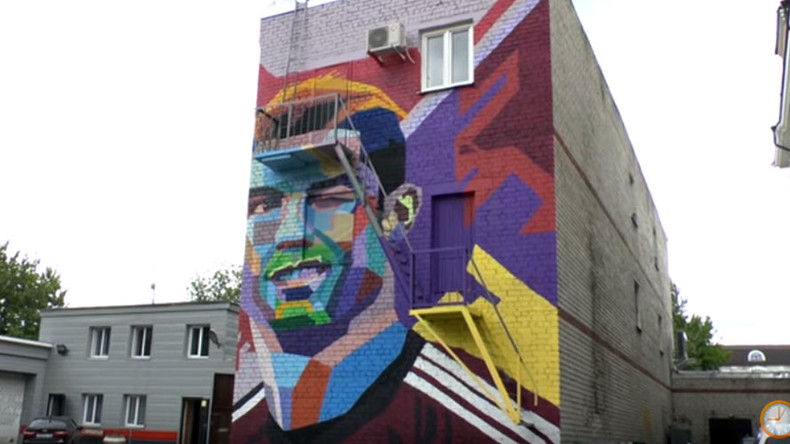 A mural of winking Portugal captain Cristiano Ronaldo has been unveiled near the Portugal national team hotel in Kazan ahead of the team’s FIFA 2017 Confederations Cup opening match in the Russian city.

Portugal open their Confed Cup account against Mexico at Kazan Arena in the Republic of Tatarstan on Sunday, one day after hosts Russia face New Zealand in the other Group A match in St. Petersburg.

The three-floor-high artwork, which took five days to complete and was painted to be visible from Ronaldo’s window at the adjacent hotel, apparently captures the winger’s audacious wink to teammates after opponent Wayne Rooney had been red carded during the Portugal versus England second-round match at the 2006 World Cup.

Rooney was dismissed for a stamp on Portugal defender Ricardo Carvalho, with many believing Ronaldo’s subsequent protestations at the foul contributed to the referee producing a red card, rather than simply awarding a free kick.

Ronaldo then winked to teammates, which was caught in full view of TV cameras, causing outrage in England as the Portuguese and Rooney were both players at English Premier League side Manchester United at the time.

It may prove a bigger hit than the last time an artist created an impression of the Real Madrid superstar.

In March, Portuguese sculptor Emanuel Santos produced a bizarre bust of the 32-year-old to commemorate Madeira Islands Airport being renamed in Ronaldo’s honor, prompting a hilarious reaction on Twitter.

The boots are unavailable to buy in stores and feature Portugal's team colors and a golden soleplate which Nike says “further celebrate Ronaldo's national pride.”