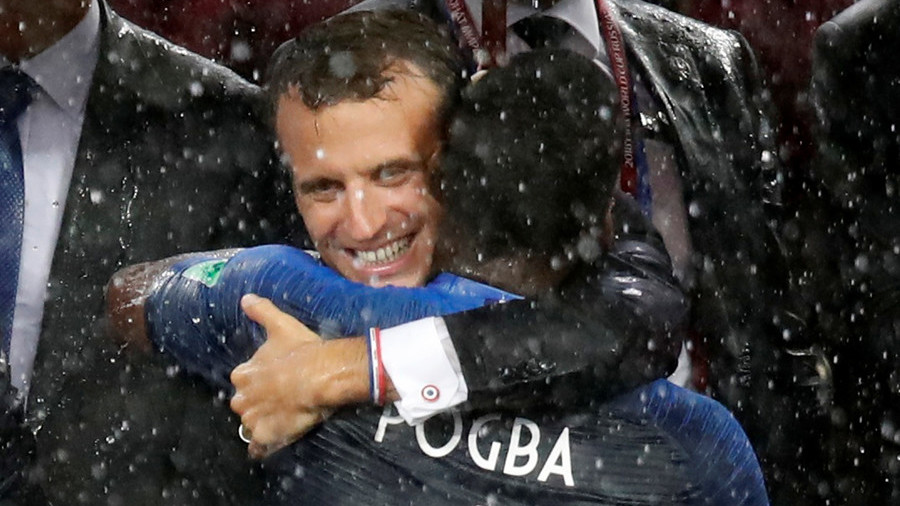 French President Emannuel Macron proved himself to be no drip despite being drenched by rain at Luzhniki Stadium following his team's World Cup final win, by flashing a celebratory 'dab' dance move with goalscorer Paul Pogba.

Upon the French team's return to their homeland after their heroics in Moscow, beating underdogs Croatia 4-2, the squad were invited to the president's residence at Élysée Palace. After snapping the swanky interior, Pogba filmed himself and the president practising an improvised dab on his Instagram story.

If anyone can get a president to dab, it’s Paul Pogba!Here he is with France’s President Emmanuel Macron. ( 🎥 Paul Pogba) pic.twitter.com/FMsysQWKnZ

Macron was in attendance at Luzhniki in Moscow with Russian President Vladimir Putin and Croatian counterpart Kolinda Grabar-Kitarovic to watch France record a 4-2 victory over a spirited Croatia and clinch their second World Cup in the space of 20 years.

The 40-year-old made headlines when he was snapped jumping forward in an epic celebration as the trio watched the match from the VIP box at Moscow's Luzhniki Stadium and was on hand after the final whistle to congratulate his players as torrential rain hammered the turf.

Macron then continued the celebrations in the dressing room, consoling each Croatian player and even captain Luka Modric's son before joining in the party with his team. Defender Banjamin Mendy was the first to record himself and the president with Pogba practising the move.

President Emmanuel Macron dabs with Benjamin Mendy & Paul Pogba. What a world, what a day. pic.twitter.com/CcPuYIKDgQ

Dabbing has been a favorite goal celebration of Pogba, although the Manchester United man abandoned the jig for his sweet left-footed strike in the match to make the score 3-1, before 19-year-old star Kylian Mbappe got his goal to make him the first teenager to score in a final since Brazil legend Pele.