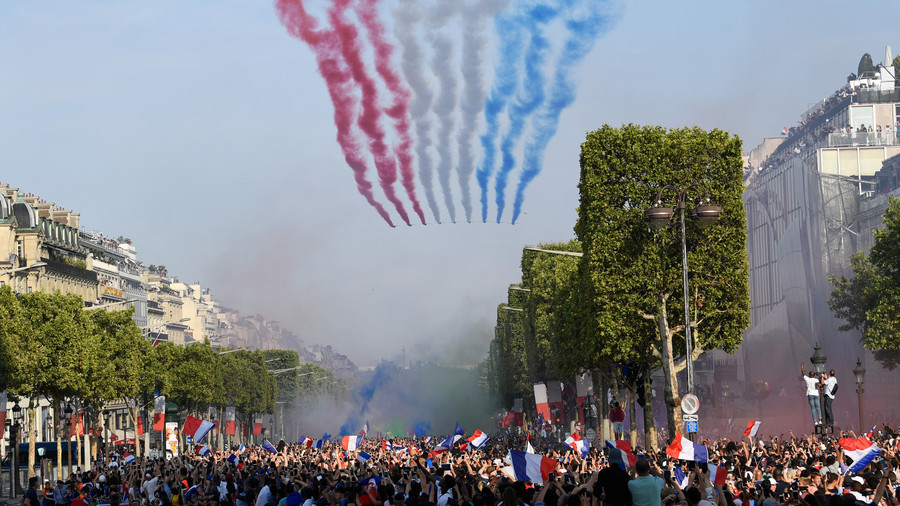 Thousands of Parisians descended on the capital’s streets on Monday to salute their football squad, as the victorious Les Bleus returned from Russia, bringing the FIFA World Cup trophy to home soil.

The sense of unity and general excitement reached its apogee in France on Monday, as the country's national football team, fresh from claiming World Cup victory over Croatia on Sunday, paraded through the Champs-Élysées to the joy of cheering crowds.

Jubilant fans have not been timid in expressing their emotions over the historic moment.

"It's just an incredible feeling. All the energy, everything, seeing them coming here – it was incredible. It was a bit short…but the sense of unity – it was absolutely incredible," a fan told RT.

The celebrations that have engulfed the French capital left nobody indifferent, with foreigners being swept up in a football fever as well.

"I'm an American and I'm living here. It's such a joy to see us all unified, it really embodies this spirit. This is what France is all about," an American woman living in Paris told RT.

As Les Bleus were hitting the streets, exhibiting the gold trophy in an open-top bus, jets flew over them displaying the red, white and blue of the French tricolor.

The Paris metro has also given its own special welcome to the players, renaming six of its stations after the team and their star coach, Didier Deschamps. Notre-Dame des Champs has temporarily been turned into Notre Didier Deschamps and Champs-Élysées-Clemenceau into Deschamps Elysées-Clémenceau.