'The ball is on your side': Putin symbolically hands Trump football to answer Syria question 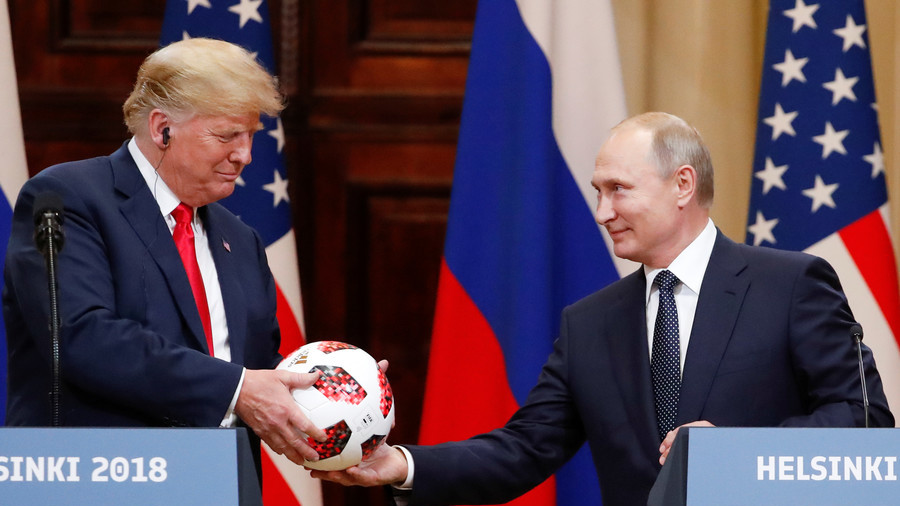 Although the World Cup is over, Russian President Vladimir Putin maintained a football theme at a summit in Helsinki with US President Donald Trump, handing a ball over to answer a question about discussions on Syria.

At a news conference following the summit, President Trump was asked whether US Secretary of State Mike Pompeo’s comments regarding operations in Syria that “the ball is on the side of Russia” were correct, and if so, what were the president’s next steps.

In response, Trump thanked Russia for its cooperation in the “helping of people” in the deliverance of humanitarian aid and the eradication of 98 percent of Islamic State forces in Syria, while also praising the military relationship between the two countries.

President Putin mentioned his discussions with French counterpart Emmanuel Macron, who was present at the World Cup final on Sunday and was pictured celebrating wildly after France’s victory, of plans to “step up” humanitarian aid efforts in which Russia was prepared to provide its cargo planes and work to resolve the problem of refugees.

“The ball is on our side. The football metaphor you just used, the president just said that we finally conducted the World Cup. Now I would like to pass over the ball to president Trump. Now the ball is on his side. The US is expected to host the 2026 World Cup,” President Putin said.

The action was not only a literalization of football jargon, but also symbolic of passing on the responsibility of hosting the World Cup; a joint bid of the US, Mexico and Canada was announced as the winner of the right to hold the 2026 version a day before Russia 2018 began in Moscow.

Receiving Putin’s presentation with a smile, Trump paid perhaps the highest compliment to Russia’s hosting of the tournament, by stating he hoped the country would emulate the success of the recent tournament.

“That’s right, thank you very much, we do host it. We hope we do as good a job, that’s very nice. That will go to my son Barron, we have no question in fact, Melania, here you go,” the president said, before bouncing the ball to his wife and US First Lady sat in the front row.