‘I wanted to throw him from the stadium’: Croatia's Lovren on flooring Pussy Riot protester 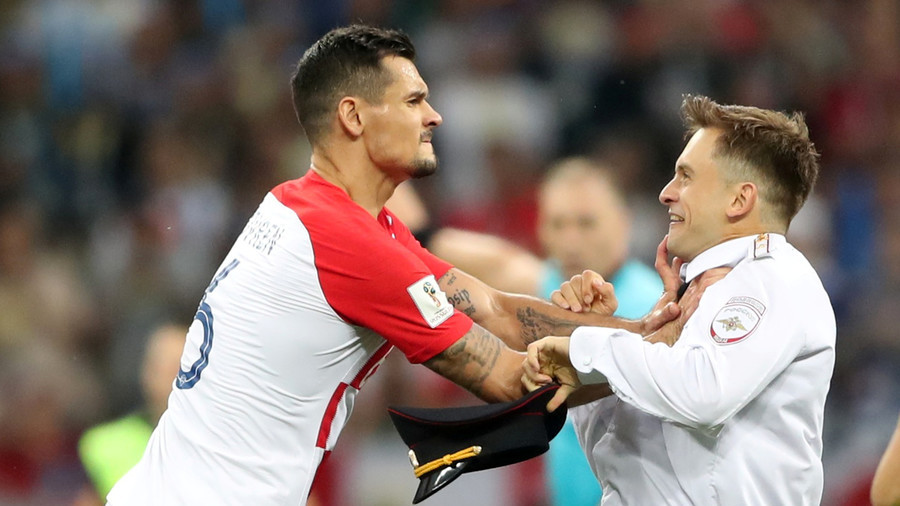 Croatian defender Dejan Lovren has spoken of his anger at protesters claiming to be members of activist group Pussy Riot who stormed the pitch during the World Cup final, blaming them for disrupting the team’s rhythm in the match.

Underdogs Croatia were 2-1 down to France and pushing for an equalizer when four members of the group stormed the pitch in the 52nd minute, forcing a halt in play while stewards attempted to remove the intruders.

While one of the protesters was snapped high-fiving French striker Kylian Mbappe, the member of the crowd to meet Lovren became acquainted with the snarling defender’s fierce tackle - being sent tumbling to the ground and into the hands of security. An irate Lovren then proceeded to shout at the fallen intruder and attempted to drag him towards the touchline.

After the game, which Croatia eventually lost 4-2 thanks to further strikes from teenage sensation Mbappe and Manchester United star Paul Pogba, Lovren expressed his fury at the invasion, which he blamed for upsetting the Croatian team’s rhythm.

“I really was mad because we'd been playing at that moment in good shape," the 29-year-old Liverpool player said, Mail Online reported. “We'd been playing good football and then some interruption came. I just lost my head and I grabbed the guy and I wished I could throw him away from the stadium.”

Goalkeeping great Peter Schmeichel was critical of Lovren’s personal performance during the match; while the player himself had told fans he deserved to be recognized as one of the best defenders in the world, former Denmark legend Schmeichel reminded viewers on RT that the defender had now lost two finals in two months.