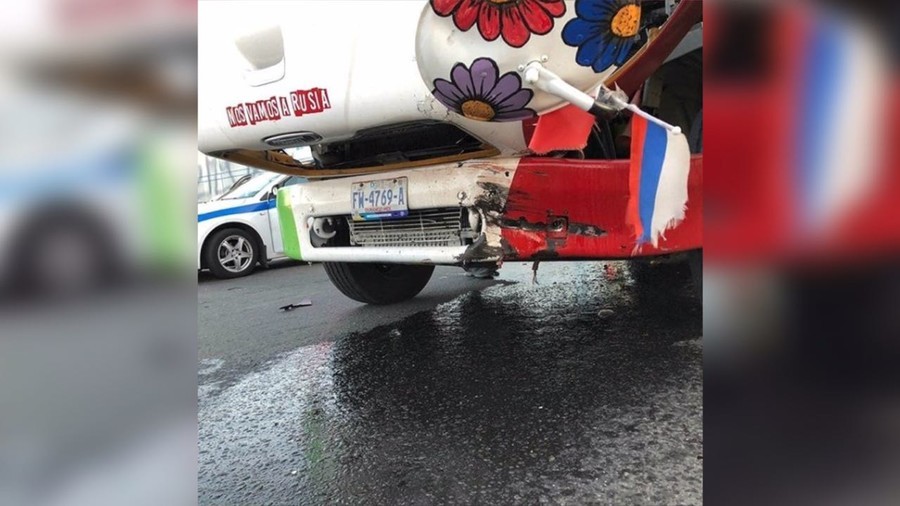 This is the moment a bus carrying a group of adventurous Mexican fans travelling around Russia collided with a motorcycle in St. Petersburg, hospitalizing the rider and busting their vehicle.

Mexican fan group ‘Ingue Su Matrushka’ have made headlines as six friends who have been traveling around Russia for the World Cup there, in a colorful campervan complete with a cardboard cutout of their friend, who was forbidden from embarking on the trip by an overbearing spouse.

But their journey was soured when a motorcyclist collided with their bus in St. Petersburg, damaging the vehicle - ironically nicknamed "la bendición", "the blessing" in Spanish.

Luckily for the fans, their busted bus was fixed by local mechanics, who were on hand to weld the hood, which had taken the brunt of the impact during the crash.

The group later posted photos and videos on their Instagram profile showing the progress: “A motorcycle crossed in red against us, fortunately the motorcyclist is fine just like us. Today at the workshop.”

According to reports in Russian media the motorcyclist had to be taken to a hospital following the crash, but further information on his condition was not available.

The sombrero-sporting bunch describe themselves on their social media as: “six friends who will undertake the adventure of our life to live the experience of the World Cup!”

The seventh member of the group, Javier, later did join his friends when his wife got wind of the viral story and relented, letting her man travel to Russia.