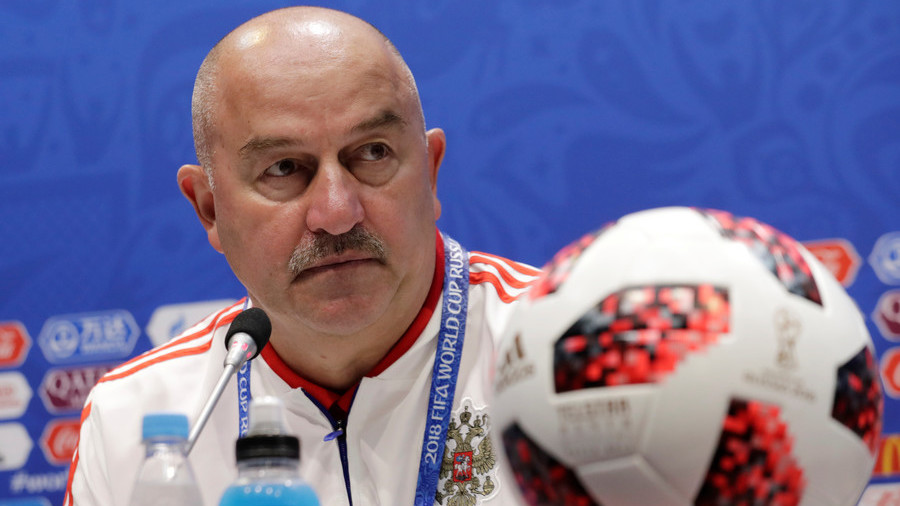 Russia manager Stanislav Cherchesov has expressed the hope that football in his native country will receive a major, long-term boost after the Sbornaya’s historic achievement at the World Cup where they made the quarter-finals.

“There are two things [I want to mention]. On one hand our team brought Russian people together. Our first purpose has been completed, but the second one [to win] has not been fully fulfilled,” Cherchesov said, TASS reported.

Read more
‘We fell one inch short & we are still sad’: Russia’s Cherchesov regrets missing out on semis

“We know, that there are teams that are much stronger than us, but as you may have seen, this means absolutely nothing. We really wanted to go further, we were one step away from reaching the semi-finals,” he added.

Talking about his pledge to deliver a better performance at the 2022 World Cup in Qatar, Cherchesov said that the main thing about gaining success is to continue moving in the right direction and developing football in Russia.

“First of all the World Cup in Qatar will be in four years from now,” he said. “There will be the UEFA Nations League and Euro 2020 before the tournament in Qatar. I do hope that a new era is starting in Russia, as everyone wants to play football. And this is the most important aspect, I think. The next question is how to develop football afterwards. We will build up a strategy for development after the Word Cup fever subsides a little bit.”

The World Cup hosts – who were the lowest ranked nation before the start of the tournament –  not only managed to make it past the group stage, winning two out of three matches, but also reached the quarter-finals after they beat 2010 world champions Spain in the last 16.

READ MORE: ‘We fell one inch short & we are still sad’: Russia’s Cherchesov regrets missing out on semis

The Sbornaya were denied a place in the semi-finals following a dramatic penalty shootout defeat to Croatia, after a 2-2 draw. Russia’s performance at the home tournament was praised by fans and pundits who admitted that the host nation’s heroics surpassed all expectations.