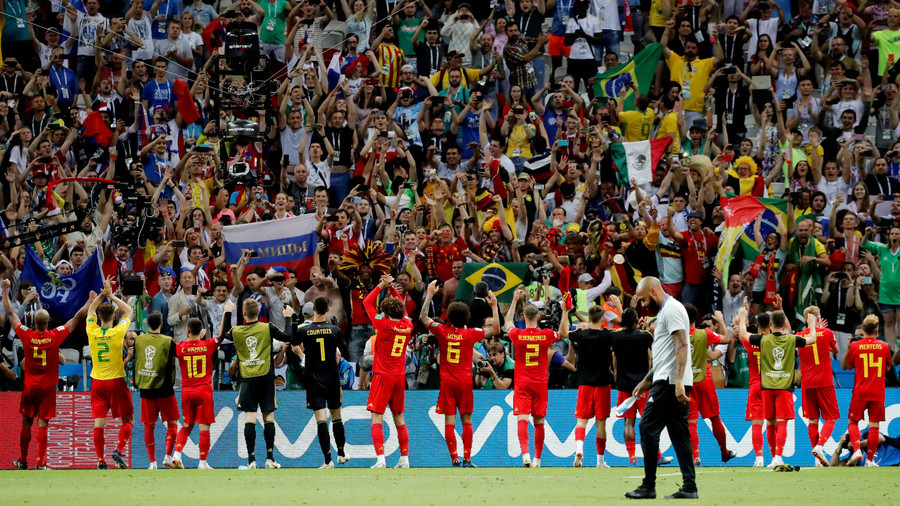 Belgium have been lauded for their performance in qualifying for their first World Cup semi final since 1986, as their so-called ‘golden generation’ sweep past five-times champions Brazil to set up a date with France.

Belgium’s 2-0 victory, secured by first half goals from Kevin De Bruyne and a Fernandinho own goal, has ensured that the World Cup will be won by a European team as Brazil crash out in Kazan.

Brazil’s goal came through substitute Renato Augusto as the South American side upped the tempo in the second half as they stared elimination in the face but in the end the combined efforts of Neymar, Philippe Coutinho and co. couldn’t break down a resolute defense.

Chelsea’s Thibault Courtois pulled off a stunning last-minute save to deny Neymar but in the end it was difficult to dispute Belgium’s superiority, with De Bruyne, Eden Hazard and Romelu Lukaku particularly impressive.

Roberto Martinez’ side will play France in the World Cup semi final in the St. Petersburg Stadium on Tuesday in an encounter which is already whetting the appetites of many a Twitter user.

Wonder what Thierry Henry is thinking now. Assistant manager of Belgium up against France in the semi-final, will be considered a traitor or a secret agent by the end of it! #worldcup

How it must pain the Brexiters to see yet another victory for Brussels. #BRABEL

Hazard, De Bruyne and Lukaku all stood up and were counted tonight. Emphasis on the term 'stood up'. It's what the best players do on big stages like this. All three were superb. #BRABEL

The World Cup has become the European Championship.

Another enthralling game. This World Cup is ridiculously good.

Brazil is out, Belgium advances. No more South American teams in the #WorldCup. It looks like we're going to have a European champion.