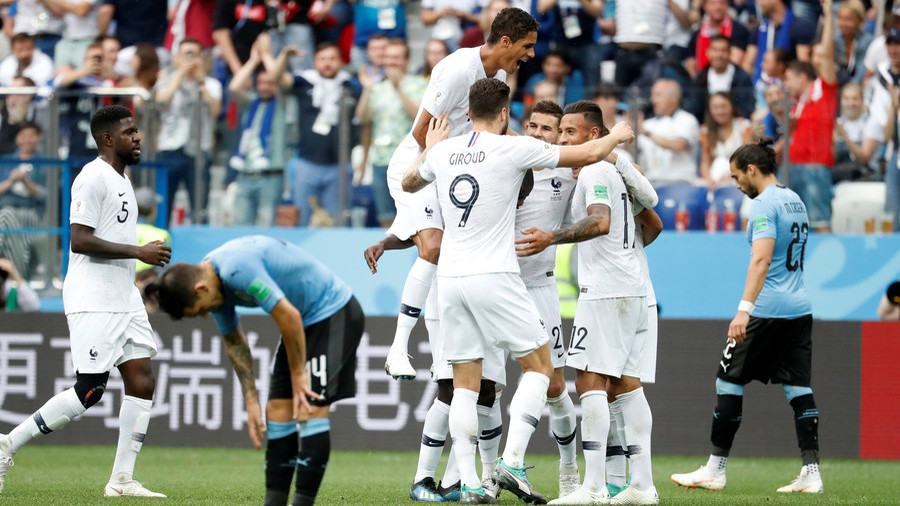 Raphael Varane’s soaring leap and a clanger from the customarily reliable Fernando Muslera allowed France’s star-studded side passage to the World Cup semi-finals as they disposed of a toothless Uruguay.

The South American nation of fewer than 4 million have been the tournament’s biggest overachievers for the entirety of its existence, but the limitations of their renowned “Garra Charrua” – the national fighting spirit – were exposed in Nizhny Novgorod by a France team that still looks like it is playing well within itself just two games from hoisting the trophy. Meanwhile Uruguay failed to replicate its 2010 achievement, and will now face an overhaul, with most of their key players on the wrong side of 30.

Deprived here of one of those veterans, hard-working striker Edinson Cavani, La Celeste knew they would have to play a perfect game, and faced an uphill task when Varane, the Real Madrid center back, rose high to put an unstoppable glancing header into the corner near the end of the first half, following a tricksy stutter-step delivery from Antoine Griezmann.

Muslera’s misguided attempt to palm away a drifting but straightforward effort from Griezmann on the 60th minute essentially sealed the outcome, with the European team on the ascendant in the closing half-hour.

Under the 12-year reign of their increasingly grizzled mastermind Oscar Tabarez, Uruguay have rarely strayed from their core values of defensive discipline, tactical acumen and relentless determination to get them through knockout games.

But the formula also depends on world-class attackers breaking the deadlock. With a forlorn Cavani looking on from the bench after failing to recover from a calf injury sustained during his match-winning performance against Portugal in the previous round, Girona’s Cristhian Stuani was designated Luis Suarez’ striker partner. The former Middlesbrough man produced an ineffectual performance familiar to those on the Teesside, leaving the Barcelona striker to grit his teeth in frustration.

Yet in the opening minutes, both teams started cautiously, and there was little advantage in chances before the deadlock was broken.

All eyes were on Kylian Mbappe after his star-making turn against Argentina, but the speedy French attacker often found himself without support on his ambitious forages up the pitch. Still, the best chance of the opening minutes came to him, when he failed to correctly time the leap for a free header.

Instead, it was arguably the man at the opposite end of the pitch, Hugo Lloris, who guaranteed a nerve-free passage after he produced an outstanding stretching save to deny what would have been a sure equalizer from a Martin Caceres header, at the close of the first half.

That France have had as many standout performers as matches at Russia 2018 is indeed testament to their quality, and whatever qualms about Deschamps' unwillingness to utilize the attacking talent. Significantly, Paul Pogba, expected to be the magnet for media attention - both good and bad - during the tournament, finds himself relatively forgotten, even though he has been an effective cog. N'Golo Kante similarly remains an unsung hero, though one suspects that he is more at peace with that than his flamboyant midfield partner.

Les Bleus go on to their first World Cup last-four game since 2006, where it will face either a pesky ambitious neighbor Belgium, or perennial rival Brazil, still keen to avenge their last three defeats.