World Cup Dream Team: The best players on display in Russia so far 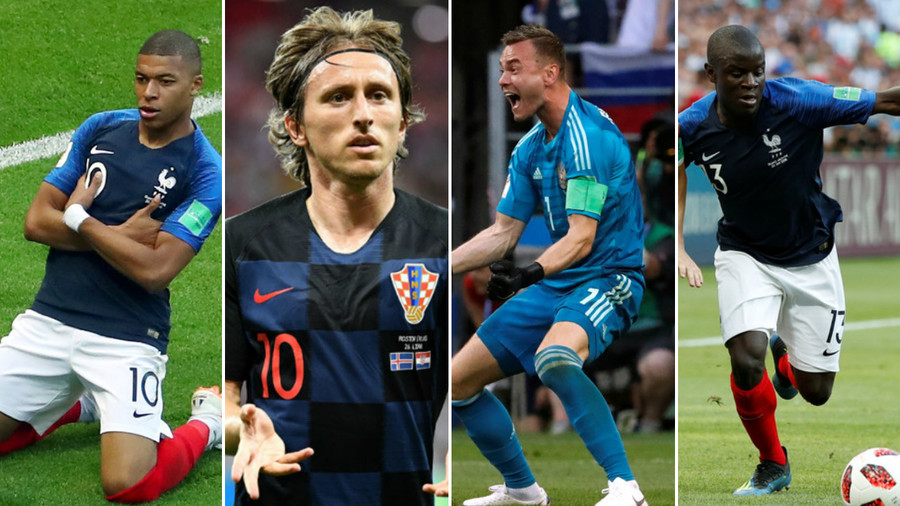 The World Cup in Russia has seen no shortage of thrills, great goals and fantastic performances but who are they players who have made the biggest impact on the tournament so far? Here is RT Sport’s Team of the Tournament so far.

This might be seen as a little bit of a hometown decision here but there is little denying the CSKA stopper’s impact upon Russia’s unlikely journey to the quarter finals. The 32-year-old delivered a true captain’s performance in the round of 16 tie with Spain, inspiring confidence in the players in front of him with a series of important saves and then, with an expectant nation watching on, saving penalties from Koke and Iago Aspas to secure Russia’s route to the last 8 and becoming a national hero along the way.

The Tottenham man didn’t make man analysts’ lists for the best defenders in the world in advance of the tournament but his performance as the right-sided defender/wing-back in Gareth Southgate’s side has earmarked him as one of the most in-form defenders in the entire competition. Trippier’s contribution on England’s right flank has been immeasurable, mixing defensive assuredness with arguably the best range of crossing in the team since he heady days of David Beckham.

The Manchester City cast-off makes the list thanks to a series of impressive performances in a Serbia side which underperformed miserably in Russia. The Serbs never really got going in the tournament but that wasn’t down to any deficiencies in Kolarov’s play, as he patrolled the team’s left flank authoritatively. Still though, by the time the World Cup reaches its conclusion it is likely that the left-sided defender slot will be taken by someone else.

The man who came so close to setting another English World Cup catastrophe into motion, Barcelona center-half Mina has established himself as one of the world’s finest defenders with his performances in Russia - and, in something of a rarity for a defender, he finds himself listed among the top scorers in the competition with three goals in as many games.

The man who Diego Maradona proclaims as the world’s finest center half has certainly performed as such in Russia. The Atletico Madrid player isn’t blessed with many of the physical characteristics of a classically dominant defender; he doesn’t have outstanding pace, nor does he possess the height or the bulk to be an imposing powerhouse of a defender. Instead, he has something far more immeasurable - defensive nous.

If Claude Makelele was the battery from which the French team of yesteryear was built, N’Golo Kante is his modern day fusion-powered equivalent. The Chelsea man plays the game with an impressive subtlety and has been a crucial component in a French team which has advanced to the quarter finals on the back of his artistry in the French engine room.

You wouldn’t have found a whole lot of football fans outside of Russia a month ago who knew who Aleksandr Golovin was but the 22-year-old is now one of the hottest properties in world football after a string of impressive performances during his nation’s run to the quarter finals. A big money move to Chelsea beckons the Russian, who has likely played his last game in the Russian Premier League.

The artistry of the diminutive Croat’s game is difficult to put into words without relying on clichés like ‘pulling the strings’ or ‘puppeteer’ but the mere mention of them should give some impression at the type of role Modric plays for his national team, as well as Real Madrid. Croatia have emerged as serious contenders to win their first World Cup and, if they do, expect airports and all manner of other public amenities to be named after the man who made it all possible, Luka Modric.

Kane is the top scorer at this summer’s World Cup with 6 goals plundered in the 3 games he has played, and even with three of those being penalties the Tottenham striker has earned his place among the world’s elite not just from his performances but also from the leadership he has displayed. England fans will no doubt hope that he maintains his impressive streak of finding the net in every game he has been named as captain.

If you didn’t know it before this tournament, make no mistake now. Kylian Mbappe is one of the best players in the world. The 19-year-old striker has been a revelation since bursting onto the scene a little over a year in the red & white of Monaco, before continuing his progression leading the line for PSG. Now, with the world very much after his feet and comparisons aplenty to the Brazilian Ronaldo, it seems that he is set to become Real Madrid’s latest ‘Galactico’ if rumors in the media prove correct.

Ronaldo’s hat-trick performance against Spain in the group stages has just about placed him above Romelu Lukaku for the third slot in our three-man attack. While Ronaldo’s World Cup never really took off like it threatened to after the heights of that performance, it was still arguably the finest single display by any player so far in Russia.