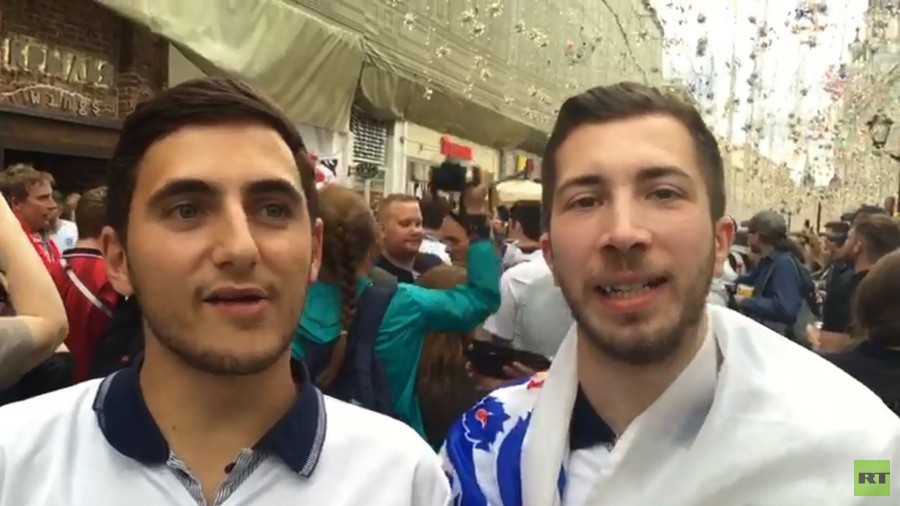 England supporters in Moscow ahead of their crunch last 16 match versus Colombia have called any Three Lions fans who stayed at home a “mug,” after being saved by a Russian after losing their wallets.

Friends and Three Lions fans Aaron and Jamie, from London, made the journey over to Russia to support Gareth Southgate’s men in the 2018 World Cup and have told of their “unbelievable” time in the country.

“Unbelievable, absolutely loving it. They said there was going to be trouble, there has been none whatsoever - everyone’s lovely,” Aaron said outside a bar on Nikolskaya Street, near Red Square, the Russian capital’s iconic epicenter, which had been temporarily taken over by England fans.

“Anyone who’s stayed at home, you’re a mug, you should have come out here!"

'If you stayed home you're a mug..Russia is amazing..we lost our wallets and the first Russian we met paid for our cab!' Two #Eng fans told not to come to #WorldCup on Nikolskaya Street in Central Moscow pic.twitter.com/h6IZx7P4Jr

“Every Russian is so friendly. We lost our wallets, couldn’t get home, the first Russian we spoke to paid for our cab! Every Russian here knows it’s coming home!” Jamie added.

The two lads expressed hope of besting Colombia, providing the mercurial James Rodriguez is not in the starting lineup for the South Americans.

“Beat Colombia and we can beat anyone this side of the draw," they said. "Without James it's like taking away Harry Kane from us," they added, before stating they were praying the game will not have to be decided by a dreaded penalty shootout.

Before the Russia 2018 tournament, large sections of the UK press tried to discourage England fans from traveling to Russia for fear of ultra-violent hooligans, among other scaremongering articles.

It was a different story down on Nikolskaya, which has become the de facto fan center for the tournament, where England supporters sang merrily in anticipation of their knockout stage tie with Colombia.

Chants of “don’t take me home” and “I wanna stay here” filled the air on Nikolskaya outside a bar temporarily taken over by jubilant fans. One young was given a drum-roll-type cheer before lifting a replica World Cup trophy, much to his and everyone’s delight.

'Don't take me home' and 'I wanna stay here' are the chants from fans who were told not to come #Eng #WorldCup pic.twitter.com/RjGqBlem1E

Their praise was echoed by a group of Colombia fans on their way to the game outside Spartak Stadium, who played music and danced to the venue while one of the band shouted “We love Russia, Russia is number one.”

'We love Russia, Russia is the best!' is the message from Colombia's most rhythmic fans as they arrive at Spartak Stadium #Col pic.twitter.com/DY0HWBcOzZ

Colombians have taken over Manezhnaya Square near the #WorldCup clock - not an England shirt in sight #Col #Eng pic.twitter.com/M6zpjcRIl9

England and Colombia go into their meeting at Spartak Stadium knowing a date with Sweden in Samara awaits them in the quarter-finals.