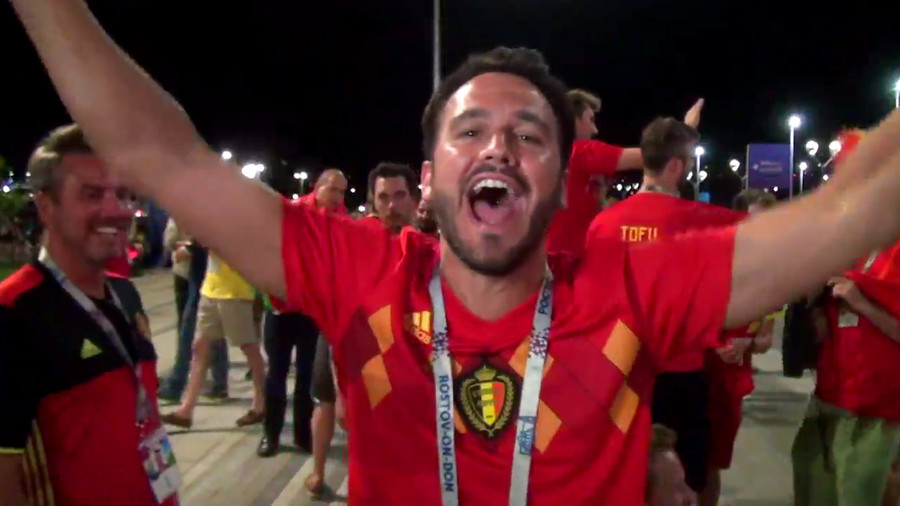 One ecstatic Belgian fan issued an apology to his wife, shouting "I am sorry, I stay here, I love Russia", after his team's dramatic come-from-behind 3-2 victory against Japan on Monday.

The statement was caught on camera after the win at Rostov Arena, on Russia's Black Sea coast, and which set up a quarter-final date with Neymar's Brazil in Kazan.

Belgium found themselves 2-0 down through early second-half strikes from Genki Haraguchi and Takashi Inui within four minutes of each other.

But the 'Samurai Blue' could not hold off the 'Red Devils' as defender Jan Verthongen pulled one back before the huge frame of Marouane Fellaini rose to head in an equalizer on 74 minutes.

Right at the death, Belgium broke with Japan stranded high up the pitch and Nacer Chadli finished a counterattack by slotting home a 94th-minute winner in the dying seconds of stoppage time.

After the match, the latest in a string of pulsating encounters in the tournament, Belgian fans poured out of the stadium in raptures, one supporter in particular giving an outpouring of emotion straight to one TV camera.

"It was incredible, we believe that we come back in Belgium. I think that I must say to my wife I come back - and no!  I go to Kazan," the incredulous fans shouted.

"Oh my wife I am so sorry, I stay! I love Russia and we will be champions of the world!" he added, before literally jumping for joy.

A lot of expectation has been heaped on Belgium at the last few major tournaments, with their side of Eden Hazard, Romelu Lukaku, Vertonghen and Kevin De Bruyne carrying the hefty tag of 'The Golden Generation', which has as yet come up short on the biggest stages.

If they are to justify that label, they will have to negotiate past a fluid Brazil side that boasts the precocious Neymar in their ranks, and the weight of their own fans' expectations.