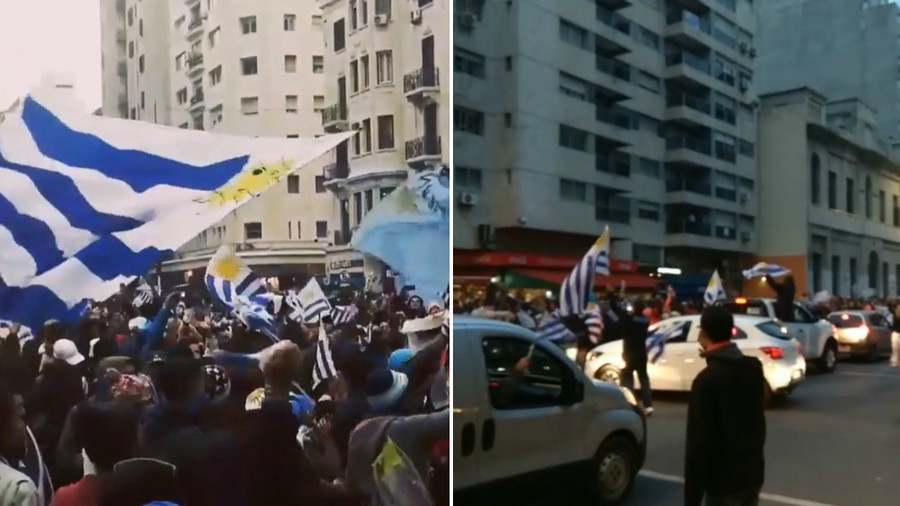 Edinson Cavani’s amazing double has sent Montevideo into wild celebrations. The 2-1 victory over Cristiano Ronaldo's Portugal has propelled Uruguay into the World Cup quarterfinals, with reverberations across the entire country.

Following their team’s amazing performance, fans poured into the streets of Uruguay's capital in wild celebrations. Carrying national flags and singing football anthems, they paralyzed traffic on the streets dancing their joy away.

The star of the game that sent Cristiano Ronaldo's team back home was Paris Saint-Germain's striker Edinson Cavani, who opened the score with an amazing header on the 7th minute, following an amazing cross-field assist by Barcelona's Luis Suárez.

It took Portugal nearly 60 minutes to answer, with a technically executed header by Pepe on 55 minutes following a high ball cross from the corner. Uruguay, however, soon demonstrated their hunger to win, with Cavani’s one-touch curler.

Uruguayan fans also showed appreciation to the sportsmanship gesture by Ronaldo, who helped the injured and limping Cavani off the pitch with just 17 minutes left to play.

With or without their star player, Uruguay will take on France in Nizhny Novgorod on July 6 in the Quarter Final game. Earlier in the day, France beat Argentina 4-3 and sent Lionel Messi and his squad packing.