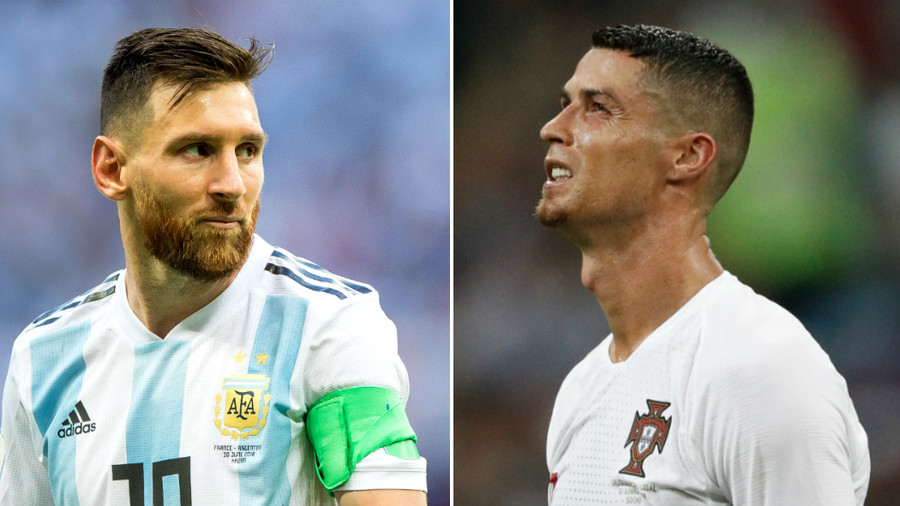 The two players who have dominated world football for the last decade are heading home from the World Cup in Russia, as a dejected Cristiano Ronaldo joins his chief rival Lionel Messi in taking an early exit.

Both Portugal and Argentina were beaten in Saturday’s opening round of 16 games and in both cases, Ronaldo and Messi were overshadowed a PSG player.

Kylian Mbappe, France’s 19-year-old striker, was instrumental in defeating Messi’s Argentina while his clubmate in the French capital, Edinson Cavani, scored the brace which condemned Portugal to defeat.

It would have been an intriguing Messi v Ronaldo quarter final clash had both of their sides progressed but in the end they were of the multiple time Ballon d’Or winners were able to inspire nor drag their teammates to victory.

Both now depart the tournament with sour tastes in their mouths and having extended, perhaps forever, their record of never hitting the back of the net during a World Cup knockout game.

Despite not hitting their expected heights in Russia, the internet has been quick to pay tribute to the duo who have made such a big impression on 'the beautiful game'.

In all seriousness I feel privileged to have seen Messi & Ronaldo play at World Cups.& of course not winning it has zero impact whatsoever on their legacies.They’ve made the impossible look possible.

Pelé 31Maradona 33Zidane 33Ronaldinho 33Cruyff 30Ronaldo (Brazilian) 33are the ages of the all time greats at their final world cups...Messi’s 31 & Ronaldo is 33This very well would be goodbye to this generation of the 2 best players of all-time.Thank you, 🐐’s. pic.twitter.com/qz3mTUH6wp

World Cup 2018 what a scintillating life experience you are. No USA. Ronaldo Messi, and Salah all crashed out. Yet this tournament remains Greatest, most Entertaining World Cup I have ever seen. Every game leaves me a palpitating mess on the floor. I never ever want it to end

This year they should just replace the 3rd/4th place play-off with Ronaldo v Messi.

So, after all that, both Messi and Ronaldo go out of the World Cup on the same day, and still not a single knock-out goal between them after four World Cups each.

Messi and Ronaldo out on the same day Mbappe shines. Feels poetic.Also, this #WorldCup has been PHENOMENAL.

Ronaldo and Messi making fun of each other for busting out of the #WorldCup pic.twitter.com/utaW7rQ6HY

Messi and Ronaldo at the airport waiting for their flights back home. pic.twitter.com/R1GJASXlXo

Both Ronaldo and Messi go home. Both remain without a goal in the knockout stages of any World Cup. Remarkable for 2 of the games all time greats.