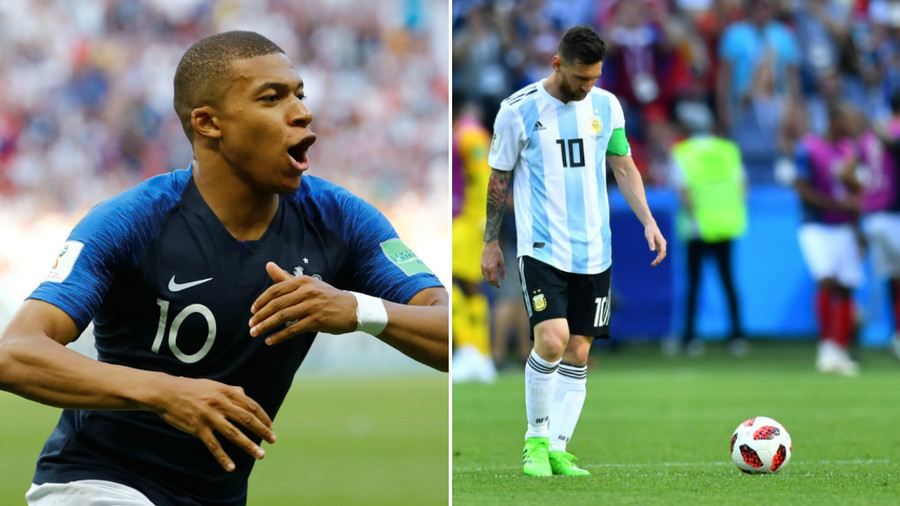 The World Cup is losing Lionel Messi after France overwhelmed Argentina in Kazan but a stunning performance from teenage sensation Kylian Mbappe suggests that a torch has been passed to the game’s next superstar.

The defensive frailties which have permeated each of Argentina’s games at Russia 2018 eventually proved to be their undoing on Saturday, conceding four times to a rampant France side to bring an end to a World Cup campaign in which Jorge Sampaoli’s men flattered to deceive.

Lionel Messi, the man on whose shoulders Argentina’s hopes rested, was well marshaled by a sturdy French backline who afforded him little opportunity, though he did supply an inch-perfect cross for Sergio Aguero to power home a late header in stoppage time.

If the diminutive Argentine existed on the periphery of the game, Paris St-Germain’s 19-year-old forward Kylian Mbappe seized it by the throat, hitting the net twice and being brought down in the box for Antoine Griezmann’s 13th-minute penalty.

It was a performance of the highest quality from the youngster and, as has been noted on social media, perhaps appropriate that he announced himself on the biggest stage of them all at the same time in which Messi departs it. Below is the reaction to a dramatic day in Kazan!

Said it before, but Kylian Mbappe will be the next global football superstar.

Phenomenal run from Mbappe. Reminds me so much of Brazilian Ronaldo.

Best game of the tournament so far by a MILE #FRAARG

That was everything we always dreamed a knockout-stage match could be. #FRAARG

Just thought...is this the last time we will ever see Messi on the #WorldCup stage? #FRAARG

When you realise a ronaldo fanboy is ending messi international's deam #FRAARG pic.twitter.com/NzWYGWR0Ud

A performance like that on world's stage 👏🏾👏🏾👏🏾. At 19 I was being rejected by Brighton 😂 #Mbappe