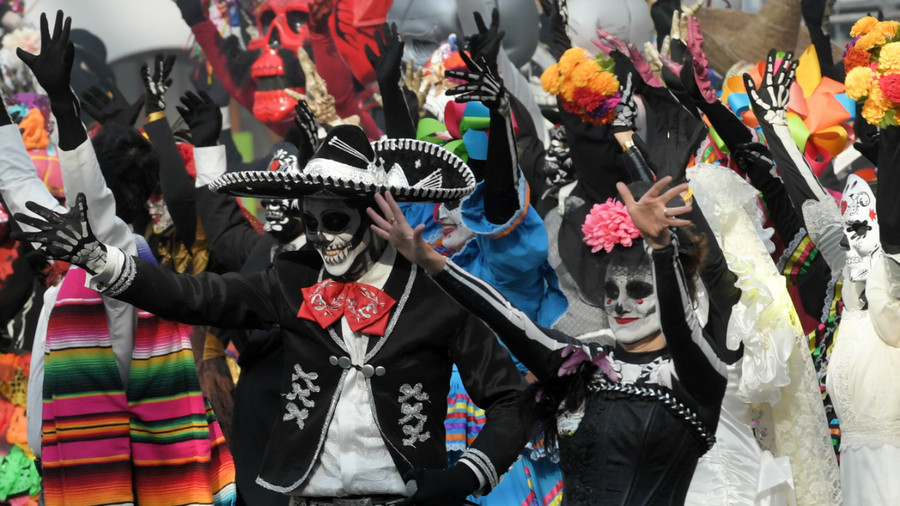 Get short URL https://on.rt.com/98ty
Mexican Day of the Dead in Moscow © Vladimir Vyatkin

Hundreds of people wearing skull makeup and donning spooky carnival costumes filled the center of Moscow on Friday to celebrate Mexico’s Day of the Dead during the FIFA 2018 World Cup.

The Mexican tradition pays tribute to deceased relatives and dates back to pre-Hispanic times, when people believed that the souls of dead ancestors returned home for one day to spend time with their families.

Spiritual guests were greeted with special gifts that were presented on a specially-designed altar in the family home.

The ancient tradition has been modified over the years, transitioning from a religious ritual to a day of celebrations and festivities, with colorful costumes that resemble outfits from Halloween carnivals.

Although the holiday is celebrated in autumn, the Mexican fan house in Moscow arranged an event at the end of June, when thousands of football fans are visiting the Russian capital, to help locals get to know the national culture and feel the atmosphere of the Mexican party.

More than 5,000 Russian guests attended the massive costume party in Gostiny Dvor in the center of Moscow. The carnival-goers had initially planned to march on Red Square, but had to settle for a scaled-back celebration after failing to coordinate with local authorities.