‘Thank you, I love you!’ Colombian fan with parting World Cup message to Russia (VIDEO) 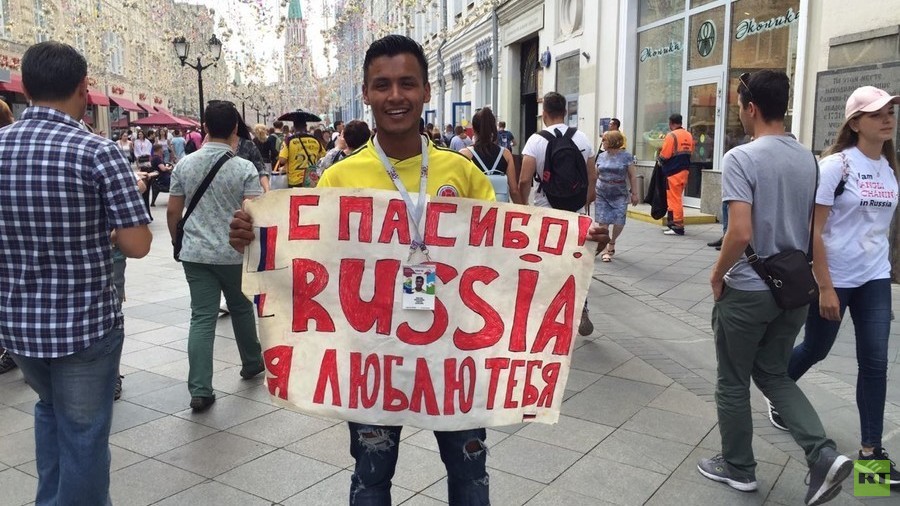 How would you spend your last day at the World Cup? Cheering on your team? Mixing with locals one last time? Colombia fan Milton Rivera chose to stand in the street with a sign declaring his love for Russia and its people.

Standing on Nikolskaya Street near Red Square and donning his Colombia jersey, Milton could be seen proudly holding a handmade banner that read: "Thank you Russia - I love you!", on his final day at the 2018 World Cup before boarding a flight back to his homeland.

Nikolskaya, the walkway that connects Moscow’s iconic center to Lubyanka, has become the unofficial fan center during the tournament, with many foreigners dubbing it the ‘Street of Lights’ for it’s coruscating decorations hanging from above.

Milton’s was the lastest fan story to come alive on the avenue of so many fairy tales, as he happily posed for pictures with passing locals young and old.

“I’m here with the sign because I’ve been here a couple of times and I love the people in Russia. They are the best, the best, they are so lovely, so I feel just fantastic being here” the 27-year-old from Cali, southwest of the capital Bogota, told RT.

Milton Rivera, 27yo Colombia fan from Cali, with a message of 'Thank you I love you' to Russians on the last day before leaving the #WorldCup #Rus #Col pic.twitter.com/aSWMZE1rRd

Colombian fans have been one of the most vibrant groups of supporters and Milton was among their ranks in Kazan to watch his team eliminate Poland with a 3-0 win at Kazan Arena in Group H.

Colombians charm the local women with a bit of jazz and slow dancing. Got to admire that #Col #WorldCup pic.twitter.com/aPrzM8P0LX

“Today is unfortunately my last day here, in Moscow, but I want to tell the people here thank you for everything. So I will take my time to be here to tell them: 'Thank you Russia!’” Milton said.

“Of course, I feel very sad. I don’t want to go. But I have to because I am running out of money and I have to go back to Colombia so you know it’s like a dream and every beautiful thing, every beautiful story has a happy end. And I think it’s my happy end to be here in Russia to be with the people in Kazan," he added.

Nobody quite boards a plane like the Colombians. The scene at Moscow Domodedovo Airport this morning #Col pic.twitter.com/M948cPLRH4

Milton did have a more football-oriented parting message before going home - and bellowed a “Colombia! Colombia! The winner!” as an additional message to his countrymen.

Colombia manager Jose Pekerman will hope Milton’s words ring true on Thursday when his team go into their crunch match against Senegal at Cosmos Arena, Samara, knowing a win will secure qualification to the last 16.