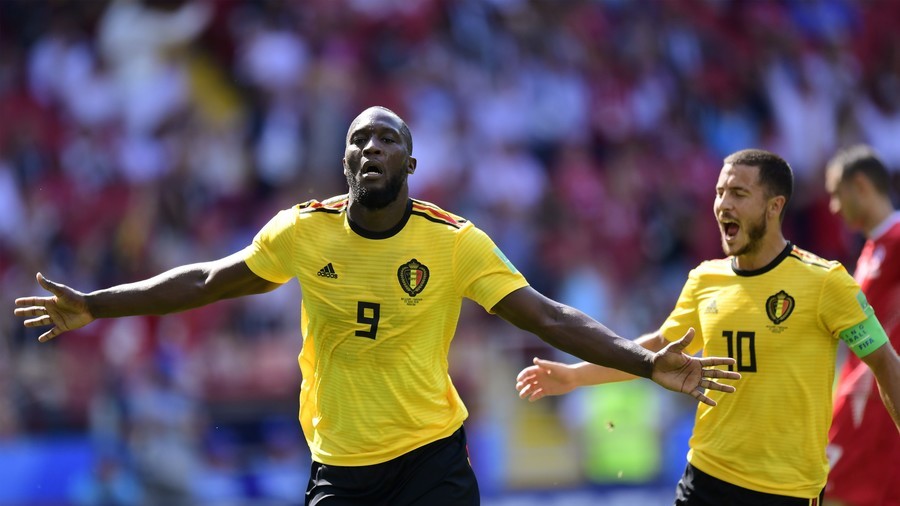 Belgium continued their impressive World Cup start as doubles from Romelu Lukaku and Eden Hazard as well as a late goal from Michy Batshuayi saw them romp to a 5-2 win over Group G rivals Tunisia in Moscow.

The Belgians took the lead from the penalty spot after just six minutes at Spartak Stadium when Hazard was fouled and converted the spot kick before striker Lukaku doubled their lead just 10 minutes later when he found space and fired into the corner.

Hazard then added a fourth – and his second – by connecting with a Kevin De Bruyne ball and rounding Tunisian ‘keeper Farouk Ben Mustapha on 51 minutes, before Michy Batshuayi added a fifth to complete the rout on 90 minutes.

Wahbi Khazri added a late consolation for Tunisia but they were well beaten despite fervent support from their fans in Moscow.

The result gives Belgium a perfect two wins from their two Group G games, scoring eight goals in the process and firing an ominous warning to main rivals England ahead of their meeting in Kaliningrad on Thursday.

The Belgians did not need long to break the deadlock in Moscow and Chelsea star Hazard opened the scoring from the penalty spot on six minutes, after he was fouled by Syam Ben Youssef.

There were protests from the Tunisians that the infringement had been outside the box, but the VAR confirmed the spot-kick and Hazard picked himself up to slot it into the bottom corner.

Roberto Martinez’s men doubled their lead 10 minutes later after when Lukaku drifted away from his man and fired into the bottom corner for his third goal at Russia 2018.

Tunisia were not down and down and punched back almost instantly in front of raucous support in Moscow when Dylan Bronn, who plays his club football for Gent in Belgium, headed home from a whipped free-kick from Wahbi Khazri to pull one back.

Bronn’s afternoon ended soon after on 24 minutes, however, when he was stretched off with a knee injury suffered while blocking a shot.

Lukaku could have added to his tally just before the break but failed to connect at the back post, but the Manchester United striker didn’t have to wait long when he timed his run perfectly to connect with a Thomas Meunier pass and dink past the goalkeeper – putting him on four goals for Russia 2018 and tied in the Golden Boot race with Cristiano Ronaldo.

Belgium got their fourth through a majestic goal when De Bruyne played a 30-yard ball to Hazard, who cushioned the ball on his chest before rounding Ben Mustapha in the Tunisian goal and slotting home.

Belgium continued to lay siege to the Tunisian goal and substitute Batshuayi finally made his mark after missing several chances by turning home a cross at the back post in the 90th minute.

There was still time for Khazri to add a modicum of respectability to the scoreline, although the Belgians had been largely imperious throughout.

The Red Devils’ passage to the knockout stage seems assured, and they will only need England to avoid defeat versus Panama in Nizhny Novgorod tomorrow to be guaranteed a last 16 spot with one game to go.

Tunisia’s hopes appear all but over after their second defeat in two games, meaning their final game against Panama is likely to be a dead rubber.