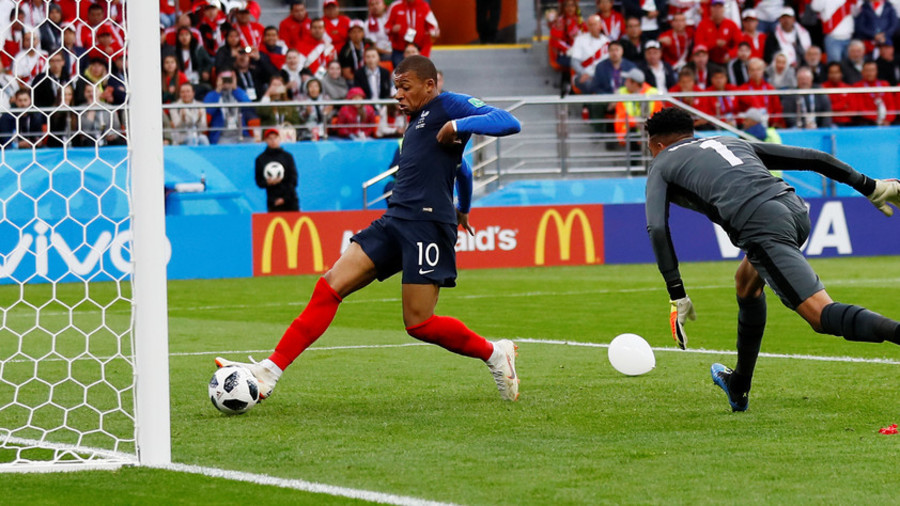 France booked their place in the World Cup knockout stages after defeating Peru 1-0 in their Group C game in Ekaterinburg thanks to a Kylian Mbappe goal, sending the spirited South Americans out of the tournament.

An appealing Peru side started strongly, but left one of the biggest foreign contingents in Russia in agony, as they let Les Bleus assert their class, and keep their goal untouched.

Roused by what sounded like a home crowd in Ekaterinburg, Peru showed purpose and skill, with direct running at a rejigged France team that has struggled for cohesion.

A quarter of an hour in, France began to exert pressure, driven by a ubiquitous N'Golo Kante, and showing a firmer structure following the reintroduction of target man Olivier Giroud, who helped relegate Barcelona talent Ousmane Dembele to a second-half cameo.

The best chance of the first half nonetheless fell to the South American side, when Guerrero, reinstated following a drug suspension just days before Russia 2018, beat a defender and shot straight into the arms of Hugo Lloris from ten yards out.

Less than five minutes later, the Peru captain was robbed of the ball by the much-maligned Paul Pogba, who passed it on to Antoine Griezmann, whose shot was deflected, only for Mbappe, the world’s most expensive teenager, to tap the ball into the undefended net.

After France finished the first half on the ascendant, Peru, who introduced two substitutes at the break, began the second with intent. The effort culminated with Jefferson Farfan, one of the introductions, striking a pretty drive from outside the area, which bounced off the outside post.

A sustained assault on the French goal in the last half an hour also failed to net a goal, continuing the tendency shown by the powerful Andean side in its loss against Denmark.

Peru, making their first appearance in the finals since Mexico 1982, will be disappointed to head to the final Group C game with no chance of going through, while France look capable of stepping up a gear for the more decisive fixtures to come from one of the tournament frontrunners.