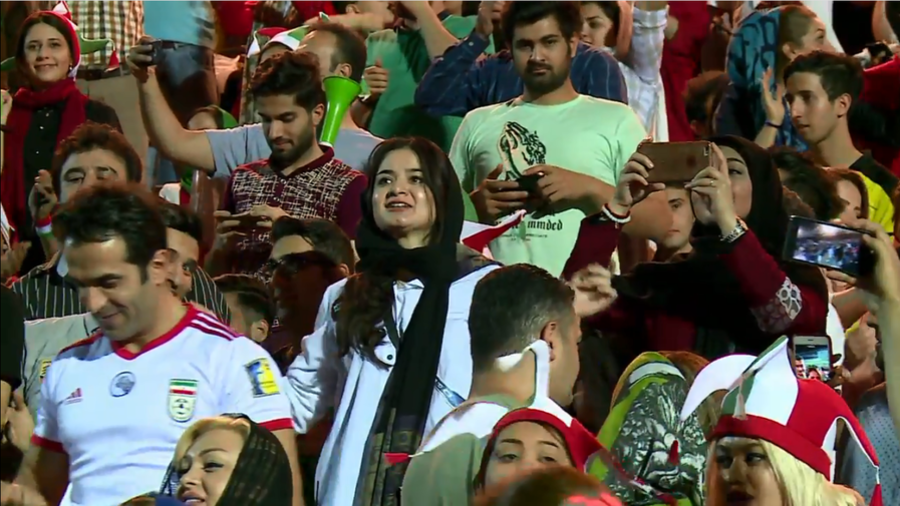 Iranian men and women were allowed in a football stadium to watch a match together for the first time in 40 years for the country's 1-0 defeat to Spain in World Cup.

Iranian women have been banned from entering stadiums in their home country for almost 40 years, but were finally allowed to go to the Azadi Stadium in the capital to watch a television broadcast of the Group B match.

In June, the governor general of Tehran Province issued an order allowing local football fans, including women, to watch the public screening. The historic ruling ended a ban which saw female fans banned from watching the game from the family section of stadiums.

The landmark event didn’t go without a controversy, however, after police blocked the entrance to the stadium just three hours before the kick-off saying that the live broadcast had been cancelled due to operational reasons.

The fans who had gathered in front of the stadium refused to go home and staged an improvised demonstration in protest at the move. Video footage showing women and children sitting on the ground next to the venue flooded social media prompting Iranian Interior Minister, Abdolreza Rahmani Fazli, to interfere.

He ordered the police to let the crowd enter the stadium where women rooted for the national team together with men for the first time since the 1979 Islamic revolution.

Iranian fans visiting the World Cup in Russia used the football tournament as a platform to protest against the country’s ban on female spectators. Banners reading “Support Iranian women to attend stadiums” were seen at Iran’s World Cup opener against Morocco.

In May 2018, five Iranian women defied the law by sneaking into a football game being dressed as men. Last year, Iranian female fans were denied access to a stadium to watch the World Cup qualifying match between Iran and Syria, while Syrian women were allowed to enter the venue to cheer for the their national team.