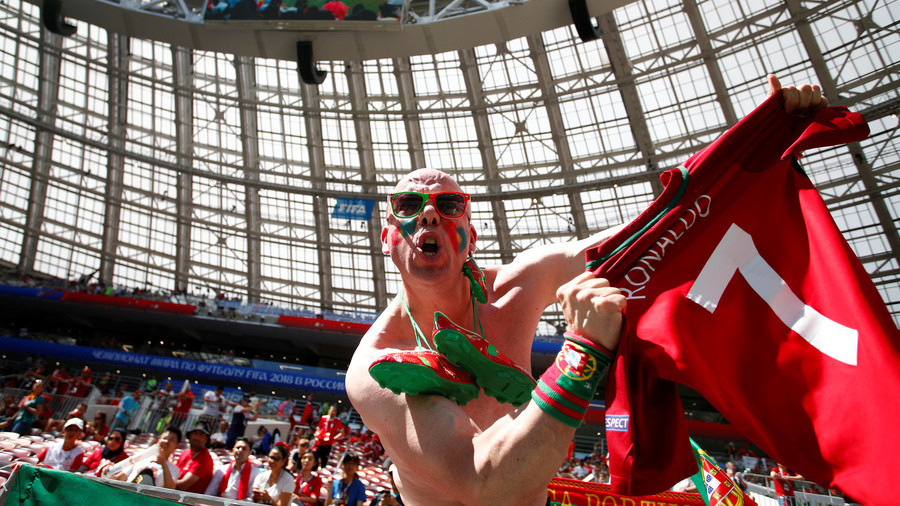 Cristiano Ronaldo superfans from far and wide descended on Moscow on Wednesday to watch their idol lead Portugal to a 1-0 win against Morocco in their World Cup Group B game at Luzhniki Stadium.

The striker’s Chinese fan club was out in force – including these two supporters. They said the Real Madrid striker had put in “the performance of his life” in scoring a hat-trick against Spain in Portugal's opener, and were hoping for at least a double from their man versus Morocco.

More #Ronaldo superfans from China. Jessica and Quentin say Spain game was the performance of his life, predict a double from him today #Por 🇨🇳 pic.twitter.com/FJmXuHIFus

These fans meanwhile had come from India, and were expectant of a good performance from the man they call "CR7".

This fan from Denmark punned on the prolific striker’s name, having ‘Penaldo’ printed on the back of his shirt because "Ronaldo always scores penalties”, he told RT.

Penaldo, because he always scores penalties, says Toni from Denmark. (Seem to remember him missing one at Luzhniki before though...) #Por #Ronaldo pic.twitter.com/YeFmEsOa0v

The Portugal star did, however, miss one spot kick at the venue for today’s game, Luzhniki, in a shootout in the Champions League Final in 2008 – although he scored in normal time and his Manchester United team went on to win the title regardless.

Some fans also paid tribute to Portugal’s other all-time great, the late Eusebio. These supporters carried a picture of Ronaldo in mid-celebration above a picture of 'The Black Pearl' – with the caption "He is here."

#Por fans with Eusebio tribute. 'He is here' the banner reads #WorldCup pic.twitter.com/904DECumxB

The five-time Ballon d’Or winner has tasted victory in the Russian capital before, winning the Champions League title here with Manchester United in 2008 and also scoring as Portugal beat Russia in the Confederations Cup last summer.