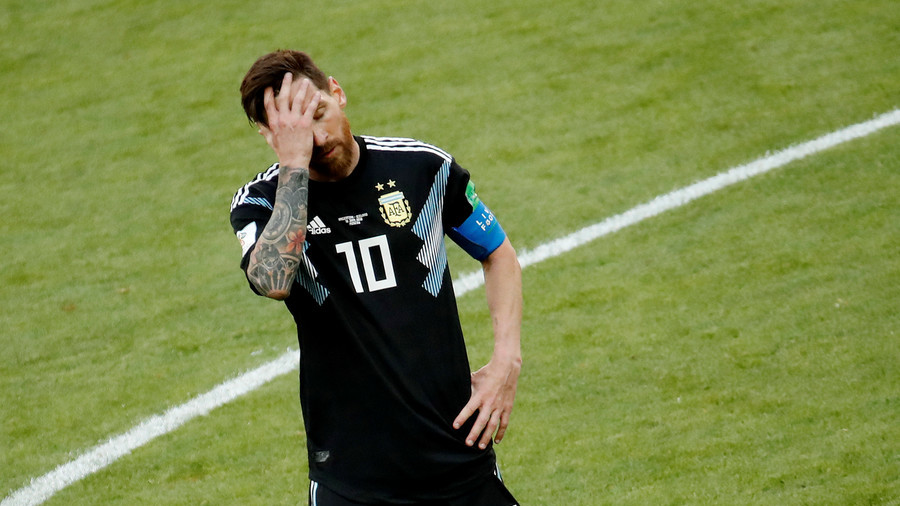 Lionel Messi failed to match the heroics of rival Cristiano Ronaldo as his Argentina side were held to a pulsating 1-1 draw by World Cup first-timers Iceland in Moscow.

The Group D opener between Argentina and Iceland could have been billed as 'The Vikings' versus 'The King' such had been the focus on leading man Lionel Messi to finally win an international tournament with La Albiceleste.

After Cristiano Ronaldo's drama show in Sochi the previous night, everything was over to Messi in Moscow's matinee.

The Russian capital's second host venue, Spartak Stadium, is one of the more atmospheric of the 12, and both sets of supporters took full advantage of the acoustics.

When the match got underway, Argentina endured a subdued start to the game; Messi's first shot on target after 15 minutes was beaten away by Hannes Halldórsson.

The first goal came not from the supposed world's best, but perhaps the Premier League's best striker. Eduardo Salvio's low, hard ball left Sergio Aguero with plenty to do, but the Manchester City forward turned beautifully to rifle left-footed into the top corner.

But if anyone expected Iceland to roll over on their silver screen debut, then they certainly hadn't read the script.

The team's tactical rigidity was rewarded as they drew level four minutes later when, after a goalmouth scramble, the ball fell to Alfred Finnbogason who side-footed home past a grounded Willy Caballero in the Argentina goal.

The Vikings finished the half stronger and went into the break knowing they could cause problems for the two-time World Cup winners.

After the restart, Messi got his chance to make his mark on the game from a penalty, but his spot-kick was comfortably saved by Halldórsson.

As time wore on, Messi wore the look of a beaten man as attack after attack was broken down by Iceland. His last chance came deep into the additional five minutes but his tame free-kick from 30 yards bounced off the wall and with that the match ended.

Argentina had matched the result of Portugal the previous night, but Messi had come nowhere close to Ronaldo's show-stopping efforts as world football's most intriguing personal battles raged on in Russia.