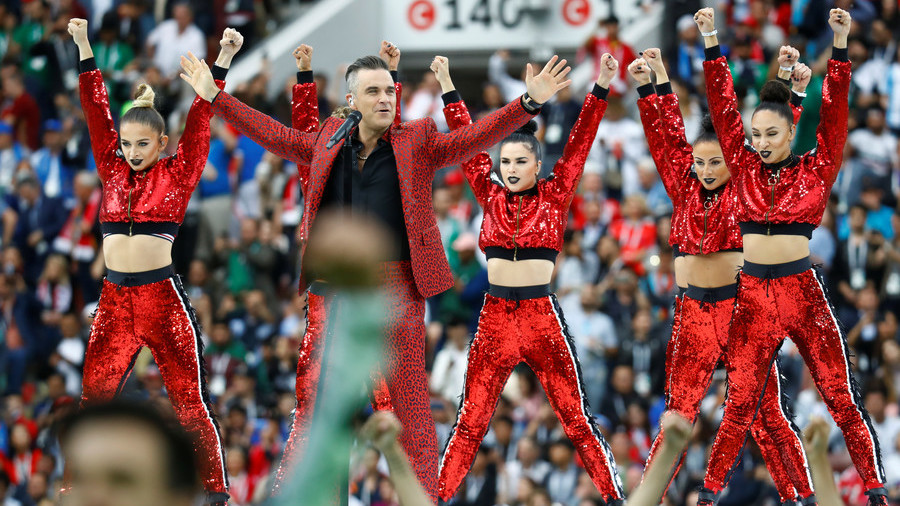 The FIFA 2018 World Cup has kicked off in Moscow, after an opening ceremony which saw Russian President Vladimir Putin and FIFA chief Gianni Infantino welcome fans to Russia and promise "football will conquer the world."

Before the opening game between hosts Russia and Saudi Arabia, the 80,000 fans in attendance at Luzhniki Stadium were treated to a lively music and dance performance by UK pop star Robbie Williams.

The pop veteran kicked the opening ceremony off with a blast of 'Let Me Entertain You' - before going into a medley of his hits, including an 'Angels' duet with Russian opera star Aida Garifullina.

There was a dazzling on-pitch light show to accompany Williams and opera star Garifullina, with performers dressed in the colors of each of the 32 World Cup teams bopping to the music.

Williams then made his way around the pitch while belting out 'Rock DJ'.

Before the game, Russian President Vladimir Putin addressed the fans and players, saying: "Russians love football, it is what we call love at first sight, ever since the first official match was held in the country in 1897."

He went on to wish "an unforgettable experience" to the thousands of fans traveling to Russia for the football showpiece, closing with the line: "welcome to Russia."