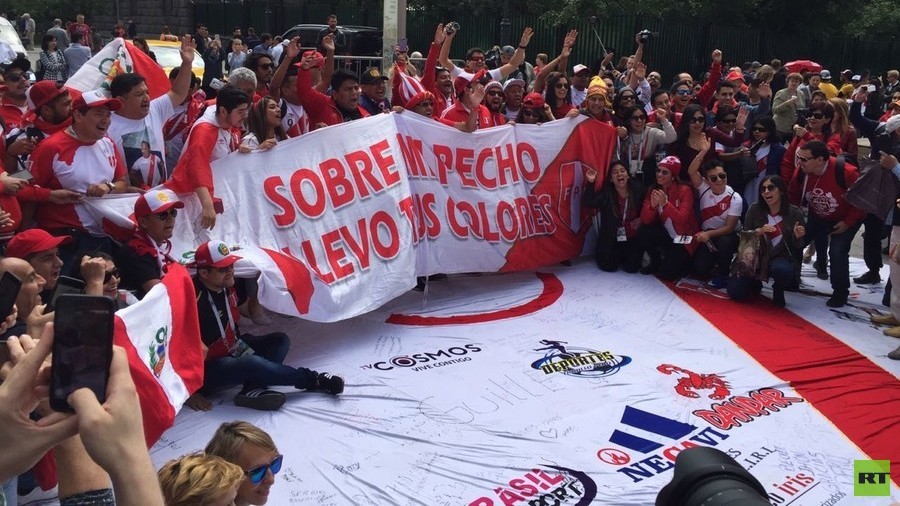 Peru fans continue to make their presence felt in the centre of Moscow with a huge shirt designed for fans from all over the world to scribble down positive messages to the team.

Huge Peru shirt on Nikolskaya near Red Square, from the city of Trujillo, designed so fans can scribble 'positive messages' on the jersey for the team #WorldCup #Per pic.twitter.com/f9gtRywugW

The South American nation are celebrating their first World Cup appearance in 36 years since Spain '82 and are wasting no time in making it a trip to remember.

Fans add their personal messages to the giant #Per shirt in Moscow. Peruvians are by far my favorite fans so far. Up the Peru! #WorldCup pic.twitter.com/45jw2u1vJA

On Moscow's Nikolskaya Street, a stone's throw from Red Square, dozens of Peru fans unfolded a huge flag in the shape and colors of a Peruvian team shirt.

Peru fan Leo told RT that the shirt is from the city of Trujillo in northwestern Peru, known as the birthplace of the nation's traditional dance, marinera.

Peru fan Leo explaining the idea behind the jersey #WorldCup #Per pic.twitter.com/cN5iNY5Nbw

"The idea is to send a message, this is from a city called Trujillo in Peru," Leo said. "So these people are Peruvian fans and they brought this to Russia just so everyone can sign it and write positive messages. Hopefully Peru are going to do a really good World Cup!"

Peru fans with a banner reading 'I carry your colors on my chest' while singing 'We're coming to Russia, we're here to win' #Per #WorldCup pic.twitter.com/IkmyeVdBzw

Fans used the shirt as a flag to wave while they broke out into a rendition of "We're in Russia, we're here to win", behind another flag with the message "We carry your colors on our chest."

Passersby could be seen kneeling and etching their own sentiments onto the shirt.