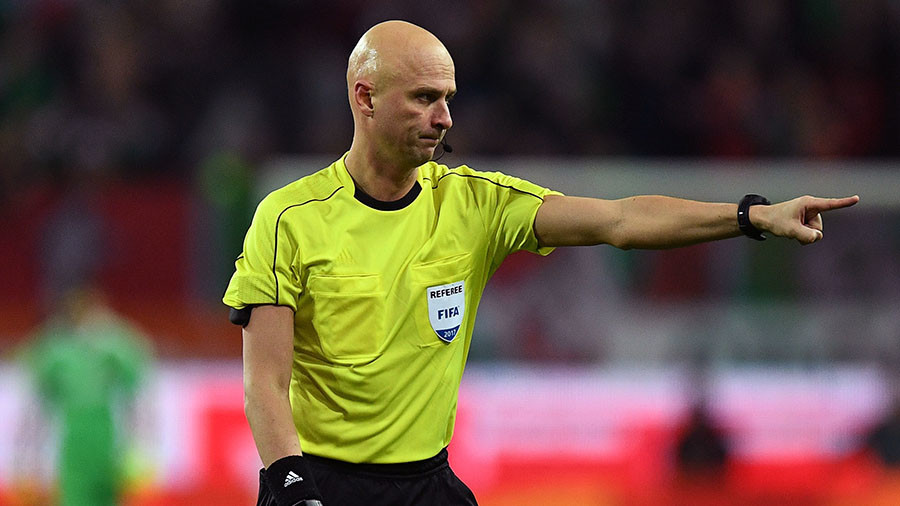 Referee Sergei Karasev, who was recently included in the pool of referees appointed for the Russia 2018 FIFA World Cup, spoke exclusively to RT about his appointment for the tournament.

In an exclusive interview with RT, Karasev talked about his appointment for the tournament, the newly-adopted Video Assistant Referees (VAR) system, and comparisons with the world's most recognizable football referee – Pierluigi Collina.

Karasev called his inclusion on the list of World Cup officials as a big “step forward,” but insisted that there is nothing to celebrate just yet.

"It's difficult to describe my emotions at being shortlisted," Karasev told RT. "We have already come a long way, as the selection process began two years ago. I felt a great sense of relief after our panel of referees was chosen for the FIFA World Cup.

"But it's too early to celebrate, we have taken a big step forward, but we need to be appointed to officiate World Cup matches and to do a good job there in order to say that we are fully-fledged participants of the tournament. Responsibility is very high as the World Cup will be staged on our home soil. Our chances [of being appointed for a World Cup match] increased a little bit, when the list was reduced to just 36 refereeing teams and we happened to be among them."

Karasev regretted that the work of his fellow officials remains unseen by spectators and maintains that being selected for the World Cup is a team victory.

"I teamed up with my partners six years ago, when I was a complete newcomer while they were already well-established referees. I learned much from them and this is also their success," a humble Karasev admitted.

"It's not fair that their job remains hidden from spectators, who can only see the main referee's decision. But 50 percent of success stems from well-coordinated cooperation with your team.

"We are very happy the World Cup will be staged in Russia as our country has never hosted global football events of such calibre. We have travelled around the globe a lot and now we are delighted to stay at home with our families. We are enormously happy to be selected for the home World Cup.

"Eight years ago when Russia was awarded the right to host the event I couldn't even dream of working at the tournament as Russian referees hadn't been invited to judge major football matches for a long time.”

Speaking about his progress as a football referee Karasev said that there is no time to rest on his laurels as his performances are constantly checked and analysed by the FIFA management in charge of appointing referees for various international matches.

"Every match under FIFA guidance is an examination you need to pass in order to move forward,” said Karasev. “I made several refereeing mistakes last autumn, and as a result our team was sent to serve Europa League matches, without appointment for the highly-ranked Champions League games.

"Pierluigi Collina, a member of the UEFA and FIFA Referees Committee, is closely monitoring progress of all the referees who have been picked up for the FIFA World Cup, including matches of national championships.”

Italian referee Collina made a name for himself as a stern disciplinarian with piercing blue eyes and distinctive bald head – due to the condition alopecia – who commanded respect from players and peers in equal measure.

Karasev, who also sports no hair, has been likened to Collina, and has said that he is pleased to be compared with arguably the world's best football referee, a man whom he deeply respects.

"At first I was compared with Collina only because of the same hairstyle,” said Karasev. “Later people started making parallels between our styles of judging football games. They say that like Collina I'm also very uncompromising and cool-headed. I have never done anything to be compared with him, but of course I watched how he worked as he is a unique referee who still has no equals."

Russia 2018 will see the introduction of the VAR system, with referees aided by video replays when making potentially match-changing decisions. Karasev expressed hope that the system will work smoothly at this summer's showpiece.

"VAR can be very helpful if it works correctly without technical errors. It can save a referee from making a vital mistake during the final game when stakes are high,” he said.

"Now technical specialists are working on the system improvement: to make it work fast and effectively. Of course football will change after VAR implementation. We will continue to judge football matches in accordance with FIFA recommendations, but we will know that there are people behind our back who can help up to solve a controversial situation.

However, he implied that elite players such as Real Madrid's Ronaldo and Barcelona's Lionel Messi, benefit from an unofficial code among football referees aimed at protecting high-profile players.

"This is partly true, though it is not written down in any rules as we must treat all the players equally,” said Karasev. “But there are several players who are worshipped by millions of people. As you may have noticed footballers don't commit serious fouls against Messi, as they respect him too much. There is no aggression against football stars, as players realize quite well that they can ruin their professional career by injuring such idols like Ronaldo and Messi. Not only judges [referees] tend to protect them, but players also try to guard them."

Finally Karasev has warned about how the misuse of flares by supporters in the stands can adversely affect a referee’s performance.

“Pyrotechnics are not the best tools to cheer for your favourite team as sudden bangs that are heard on the field can distract you [the referee] from the game increasing, your chances of making a mistake."