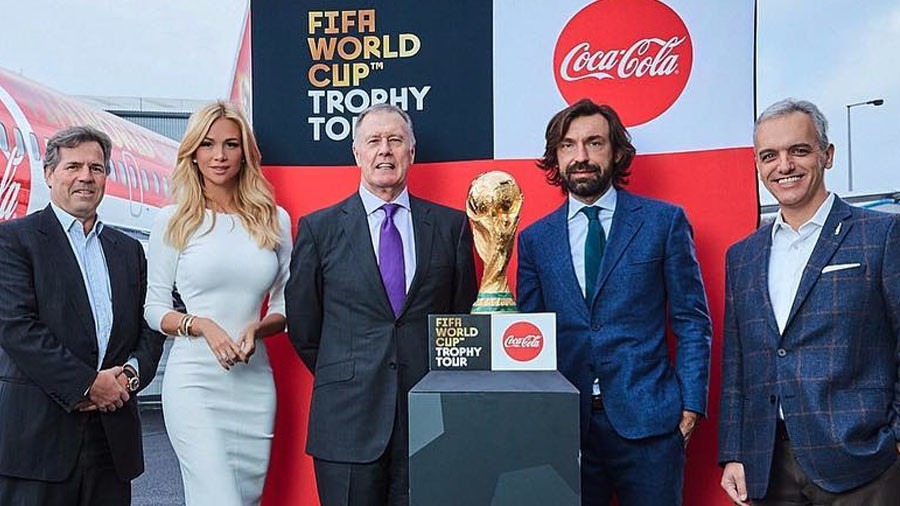 The global leg of the official FIFA World Cup trophy tour for Russia 2018 has been launched from London on Monday, after a star-studded ceremony.

The tour is the largest of its kind and will see the trophy visit 91 cities, across 51 countries and six continents. That includes visiting for the first time Austria, Mongolia and Iceland, the home of the famous ‘Viking Thunderclap’.

Before the global leg of the tour, sponsored by Coca-Cola, the trophy made its way across Russia for three months, visiting 16 cities and traveling more than 16,000km (9,900 miles), making it the longest host country tour in history.

On hand at the ceremony in London were Sir Geoff Hurst, a winner with England in 1966, Andrea Pirlo, who won the World Cup 40 years later with Italy at the Germany 2006 tournament, and Russia 2018 ambassador Victoria Lopyreva.

Midfield great Pirlo, who most notably turned out for AC Milan and Juventus during a distinguished career, described the event as a “great honor” and called winning the World Cup the “pinnacle” of a player's career.

“It is a great honor that I could be here today to send off the FIFA World Cup Trophy Tour plane on its journey around the globe,” Pirlo told the official FIFA website.

“Being able to once again hold the original trophy brings back amazing memories for me, and I cannot wait to find out who will lift this precious sporting icon after the final of the 2018 FIFA World Cup. This trophy represents the absolute pinnacle of a player's career.”

Amazing to be reunited with the FIFA #WorldCup Trophy today as it starts it journey around the world with @TrophyTour pic.twitter.com/HmB29zOnEg

Writing on Instagram, Lopyreva said: “So honored to be a part of today’s Trophy Tour event with Andrea Pirlo, Sir Geoff Hurst...This most iconic and beautiful trophy will travel to 51 countries around the world before returning to Russia – I can’t wait to see who will lift it this summer!”

By the time the trophy reaches Moscow on June 7, one week before Russia and Saudi Arabia kick off the tournament at Luzhniki Stadium in the Russian capital, the trophy will have traveled from Vladivostok in Russia’s Far East to Kaliningrad, the country’s most westerly city, and visited each of the 11 tournament host cities.

In September, Russian President Vladimir Putin kicked off the tour from Luzhniki, which coincided with the weekend of Moscow’s 870th anniversary, recognized from September 1-10, alongside FIFA President Gianni Infantino.