Mexico 2-1 Russia: Hosts crash out of Confed Cup in Kazan 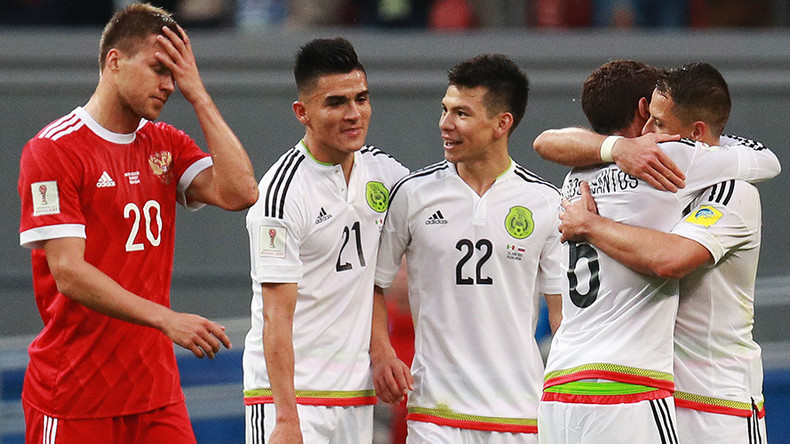 Russia have been eliminated from their home 2017 FIFA Confederations Cup at the group stage after a 2-1 defeat by Mexico in Kazan Arena.

Goals from Nestor Araujo and Hirving Lozano either side of half time was enough to cancel out an Aleksandr Samedov opener for Russia.

In a game of controversy, Russia were denied a first half penalty with the game still at 0-0 when Fedor Smolov seemed to be tripped in the box by Araujo.

What was perhaps strange was Saudi Arabian referee Fahad Al Mirdasi pulled the game back a couple of minutes after the incident for it to be reviewed by the Video Assistant Referee (VAR). However, the official decided to stick by his original decision.

Nevertheless it was Russia who drew first blood, Aleksandr Samedov finishing neatly to roll the ball left footed past Ochoa to open the scoring on 25 minutes.

But the lead lasted just five minutes when on the half hour mark Araujo looped a header over Igor Akinfeev from a bizarre free kick awarded for hand ball.

That meant both teams went into the break level with Russia needing a goal to go through. That goal never came. Instead, some comical defending from Igor Akinfeev allowed Lozano to head home when he failed to kick clear a long ball.

A Yuri Zhirkov red card when he picked up a second yellow for an apparent elbow didn’t help Russia’s cause and Mexico held on for the win.

With the loss, Russia became the first Confed Cup hosts not to progress from the group stage of the competition’s current format.