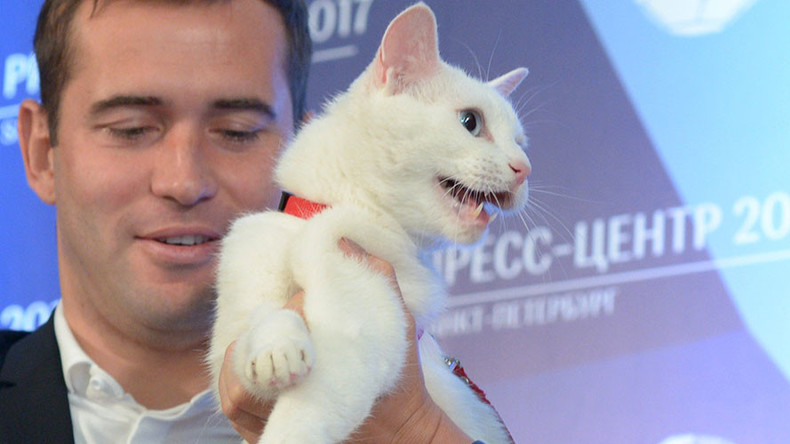 The Hermitage, founded in 1754 by Russian Empress Catherine the Great and now one of the largest museums in the world, officially announced the name of the 2017 Confederations Cup animal oracle on Thursday.

Achilles the cat – one of the many feline employees that protect exhibits from rodents at the famous Hermitage museum – was announced in his new role during a special press conference attended by Zenit St. Petersburg forward Alexander Kerzhakov.

As Hermitage official Maria Halttunen told reporters, Achilles was chosen for the role due to his “ability to choose and analyze,” as well as the fact that he’s not easily distracted because of his deafness. He’s also been castrated, meaning his feline eye isn’t turned by members of the opposite sex.

The cat received his moniker due to the Hermitage tradition of giving the names of famous painters and Mythical heroes to its animal employees.

Achilles is expected to make his first prediction this Saturday morning, prior the opening game of the tournament, which will see Russia host New Zealand at St. Petersburg Stadium on Krestovsky Island.

The animal will be offered two bowls to eat from, which will be decorated with the Russian and New Zealand flags. According to the organizers’ idea, the country marked on the bowl of Achilles’ choice should claim victory.

The Hermitage and its underground floors are historically the home for numerous cats, protecting the exhibits. The Hermitage cats are also considered one of the symbols of St. Petersburg. At the moment the famous museum houses over 50 cats.

READ MORE: FIFA Confederations Cup: The story of the tournament

The tradition of having ‘psychic’ animals for big sporting tournaments has a long history, with the one of the most successful examples being Paul the Octopus, whose accurate predictions for a number of games at the 2010 FIFA World Cup brought him worldwide popularity.