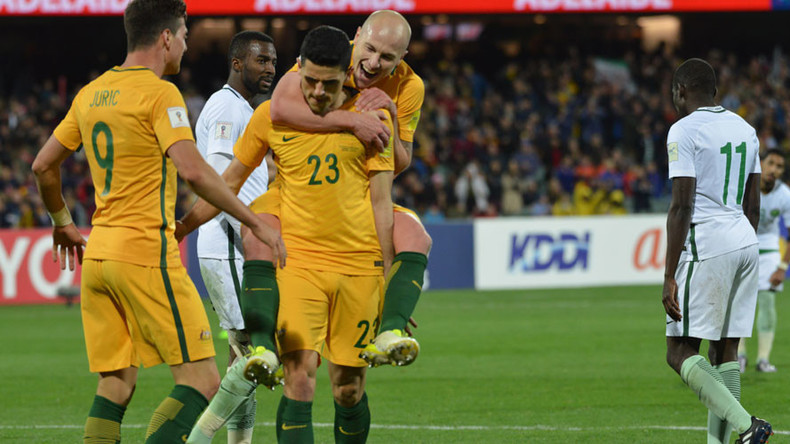 Get short URL https://on.rt.com/8e07
Aaron Mooy congratulates Tomas Rogic after scoring a goal for Australia during the World Cup football Asian qualifying match between Australia and Saudi Arabia at the Adelaide Oval in Adelaide on June 8, 2017 © Brenton Edwards / AFP

The Socceroos claimed a crucial 3-2 victory over Saudi Arabia in their World Cup qualifying match at the Adelaide Oval on Thursday.

The result gets the Socceroos’ qualifying campaign back on track, and puts them level with Japan and the Saudis on 16 points at the top of Asian qualifying Group B – although Japan have a game in hand.

The group winners and runners-up will automatically qualify for the Russia 2018 World Cup, while the third-placed team will have to negotiate continental and intercontinental playoffs.

Australia secured the win thanks to Tom Rogic’s stunning second-half strike, having twice been pegged back by the Saudis.

Tomi Juric took advantage of an error by Saudi goalkeeper Yasser Al Mosailem, who slipped as he went to kick the ball out in the sixth minute – allowing the Australian striker to score from distance.

That goal was cancelled out by Salem Al-Dawsari, though, with the Saudi player scoring in the 22nd minute following a neat one-two with Mohammed Al-Sahlawi.

Juric restored the Socceroos’ lead on 36 minutes, heading in after good work on the left flank by Matthew Leckie.

Saudi Arabia again hit back though, with Al Sahlawi finishing a tidy move after Yahia Al Shehri's chipped through ball found Taisir Al-Jassim, who nodded down to the number 10 in the penalty area - who then fired past Maty Ryan in the Australian goal.

Rogic landed what proved to be the decisive blow on 64 minutes, though, when he met Aaron Mooy’s pass, and the 24-year-old Celtic man fired home from distance.

The Socceroos now face a friendly game against Brazil in Melbourne on Tuesday, before heading to Russia for the Confederations Cup. The reigning Asian champions have been drawn in Group B, and face Germany at Fisht Stadium in Sochi in their opening game on Monday June 19.

They face Cameroon in St. Petersburg three days later, before concluding thier group-stage games against Chile in Moscow on Sunday June 25.

The match against Saudi Arabia also made headlines around the world due to an incident before the game.

Just before the kick-off, both teams were due to line up for a minute’s silence to pay their respects to the victims of the recent terrorist attack in London.

But the Saudi Arabian side failed to do so, triggering anger among the global football community.